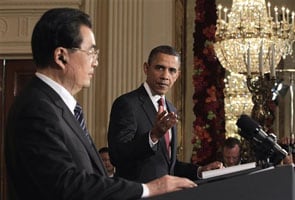 Washington: In a rare concession on a highly sensitive issue, Chinese President Hu Jintao used his White House visit on Wednesday to acknowledge "a lot still needs to be done" to improve human rights in his nation accused of repressing its people. President Barack Obama pushed China to adopt fundamental freedoms but assured Hu the US considers the communist nation a friend and vital economic partner.

Hu's comments met with immediate skepticism from human rights advocates, who dismissed them as words backed by no real history of action. Hu contended his country has "made enormous progress" but provided no specifics.

Still, his remarks seemed to hearten and surprise US officials, coming during an elaborate visit that centered on boosting trade and trust between the world's two largest economies.

More broadly, Hu and Obama sought to show off a more mature and respectful relationship, not the one often defined by disputes over currency, sovereignty and freedoms. Hu said he wanted even closer contact with Obama; Obama sought again to embrace China's rise, and the two men shared some unexpected laughs.

The Chinese president was treated lavishly, granted the honour of the third state dinner of Obama's presidency. He was welcomed in the morning to the sounds of military bands and the smiles of children on the South Lawn; he was capping the evening at a black-tie White House gala of jazz musicians and all-American food.

Eager to show progress, particularly with the unemployment weighing down his country, Obama said the nations sealed business deals that would mean $45 billion in US exports and create roughly 235,000 jobs. The package included moves by China to expand US investment and curtail theft of intellectual property.

China's human rights record is poor and worsening, with abuses ranging from censorship to illegal detention of dissidents to executions without due process, according to the US government. In a packed news conference -- one designed to underscore the freedom of speech on Obama's home turf -- Hu was pressed to defend his country's treatment of its people. He initially did not answer, saying he never heard the question translated, although the White House said that it was.

When prodded a second time, Hu defended his country's promotion of human rights. But then he added that China is enduring challenges as it develops and "a lot still needs to be done in China in terms of human rights." He said China stood to gain from other countries' input, saying: "We're also willing to learn."

For his part, Obama had to find a balance, standing up for freedoms while not overstepping Hu during the uncommon honour of a state visit. Obama said his nation's relationship with China is bettering the world's economy and security, and that it cannot stop over "tension" about human rights fairness.

Pressing for a more cautious long view, Obama said: "I want to suggest that there has been an evolution in China over the last 30 years since the first normalization over relations between the United States and China. And my expectation is that, 30 years from now, we will have seen further evolution."


Laced in their comments, however, were reminders that no amount of cooperation would trump each country's core interests.

Charles Freeman, a China expert at the Center for Strategic and International Studies, said that Hu's comments on human rights were a minor concession to US concerns. "They have learned over the years that throwing a bone to the Americans is a pretty good way to shut them up," Freeman said.

Sophie Richardson, Asia advocacy director for Human Rights Watch, said China had issued similar rhetoric before but that it added up to little more than a public relations exercise.

Earlier, as Hu's visit was just beginning, Obama was blunt about human rights. "History shows that societies are more harmonious, nations are more successful, and the world is more just when the rights and responsibilities of all nations and all people are upheld," he said.

White House officials said Hu, privately to Obama, expressed the same sentiment about China's need to do more on human rights. They expressed surprise that Hu made the statement publicly and while overseas. Chinese leaders have typically argued that how the country handles human rights is an internal matter.

In private, Obama specifically inquired about the case of Nobel Peace Prize winner Liu Xiaobo, a jailed dissident who was prevented from attending the Dec. 10 prize ceremony in the Norwegian capital. Obama, who himself won the prize last year, did not mention Liu in his public comments on Wednesday.

On another contentious issue, Obama said that the United States continues to believe that China's currency is undervalued, making Chinese imports cheaper in the United States and US goods more expensive in China. He said Hu has been moving toward a market-based system, "but it's not as fast as we want."

"President Hu's concerned, understandably, about how rapid this transition takes and the disruptions that may occur," Obama said as his Chinese counterpart stood beside him in an elegant East Room crammed with media and dignitaries. "But I'm confident that it's the right thing to do."

The US president said it was time to stop viewing every issue of the China-US relationship through the lens of rivalry. He made the case that as China grows and expands the living standard of its people, that benefit is not just humanitarian, but economic. And by that he meant good for US companies.

Mindful of protocol gaffes five years ago, when Hu visited President George W Bush, the White House seemed to host the state visit without a hitch -- that is, except for translation problems that made the news conference long and at times confusing. Hu walked with Obama around the South Lawn grounds during the arrival ceremony and spent time shaking the hands of smiling children, even sharing a moment with the U.S. president's youngest daughter, 9-year-old Sasha.
Comments
Chinese PremierObamaHu Jintao