With Dogs And Spray Paint, Grim Search For Those Dead In Hurricane Dorian

Some 70,000 people on the Bahamas need food and shelter a week after Dorian hit the islands as a top-of-scale Category 5 hurricane 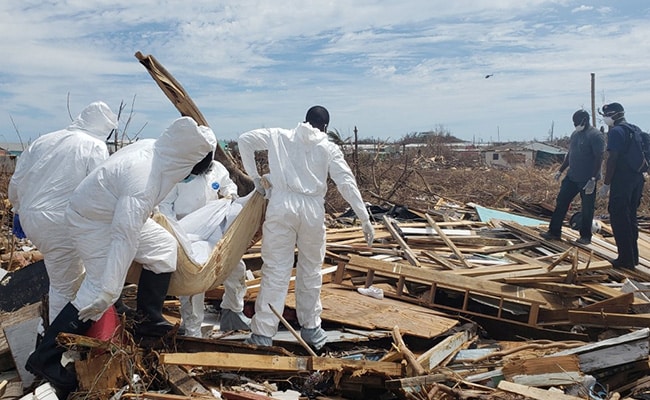 For the searchers sifting through the enormous pile of wreckage that Hurricane Dorian left after smashing the Bahamian town of Marsh Harbor, the only way to get past the stench of hidden corpses is to think about the families of the dead.

"There's chaos everywhere, you just have to pick a spot and move out from there, said Chad Belger, a lieutenant in Gainesville, Florida's fire department and part of the aid crew that responded to the northern Bahamas in the wake of the worst hurricane in its history.

The official death toll on the islands stands at 45, but evacuees, rescue workers and officials say they expect it to climb substantially as searchers find more bodies. That task is underway in the Marsh Harbor shanty towns the Mudd and the Peas.

A Reuters journalist on Sunday saw government workers, wearing disposable hazmat suits, rubber boots and masks, remove one body from a rubble-filled teal building. Nearby, nearly a dozen workers creeping across the surrounding hellscape found and marked three more corpses that need to be removed before heavy machinery, slated to arrive from Nassau on Monday, begins clearing out the wobbly mountains of plywood riddled with rusted nails that once housed thousands.

Some 70,000 people on the Bahamas need food and shelter a week after Dorian hit the islands as a top-of-scale Category 5 hurricane with wind gusts topping 200 miles per hour (320 kph), according to a U.N. World Food Programme estimate.For Belger, a muscular 38-year-old retired U.S. Army specialist who helped lead search, rescue and recovery efforts after a Category 5 Hurricane Michael struck the Florida panhandle last year, the scope of the damage has been startling.Despite the sense of urgency that brought Belger and his team of six here with little more than their recovery gear, sleeping bags and ready-to-eat meals, searching the rubble proved to be a slow task.

Many in the group carried tools that resembled heavy, hooked fireplace pokers, which they poke into tall piles of matted down grass and dead palm fronds and lift up cracked metal boards. They have little to follow other than their noses in the slow hunt for human remains.

Years of training have given Belger and his crew an eye for where to look."When you find a collapsed house and there's a bathtub with a wall over it or a closet that was damaged those are spaces that you want to get into because those are the places that people hide," Belger said through a lip packed with chewing tobacco.

Belger said the grim task was made easier by thinking about

the families of the dead.

"A local said it best when he expressed a lot of gratitude from the people who live here who did lose loved ones and will be able to have some kind of closure after their loved ones remains are found," he said.

"The devastation here is unbelievable," Colon said. "I've been deployed to Iraq and Afghanistan and this looks worse, this looks like they threw a couple of bombs here, gathered up all the stuff and threw another bomb on top of it."

He was not alone in turning to images of war to explain the devastation. U.S. Agency for International Development Administrator Mark Green told reporters in Nassau on Sunday that some areas of Great Abaco Island looked "almost as though a nuclear bomb was dropped."

Even with Mika's help, the progress is painfully slow. At times on Sunday her nose detected potential corpses that the men could not find in the mounds of rubble. The crew marked spots that they could confirm bodies with orange spray paint and used GPS waypoints to record their positions to help recovery crews coming to remove them on Monday.

Belger said there could be weeks of work ahead. He tries not to think about the number the dead he might come across."I just try to focus on the work at hand," he said through a surgical mask. "If I can go away from each day feeling like I did the best I could do to help these people in some way I can take solace in that."