More Than 6,500 Flights Delayed, 800 Cancelled Due To Winter Storm In US

More than 6,500 flights were delayed and some 800 more were canceled, according to the flight tracking website FlightAware. 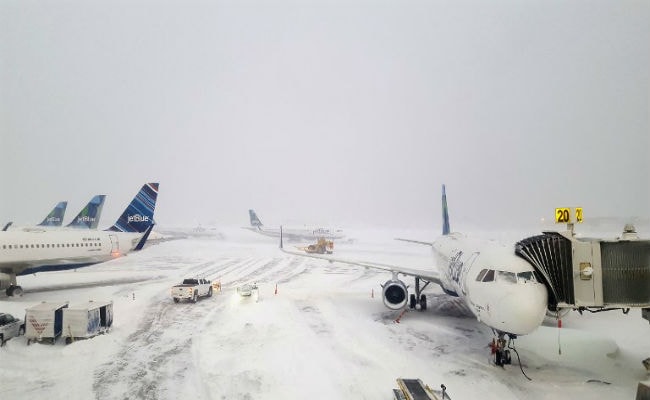 Hundreds of flights were canceled and thousands more delayed across the United States on Thursday as a powerful winter storm swept through the center of the country, frustrating holiday travelers.

More than 6,500 flights were delayed and some 800 more were canceled, according to the flight tracking website FlightAware.

A mix of rain, snow and strong winds also made travel dangerous or impossible on roads, especially in the northern and central plains, where some areas could see more than a foot of snow before the storm subsides on Friday.

Authorities reported white out conditions in parts of Nebraska and closed a section of an interstate road.

North Dakota issued a no-travel advisory for the entire eastern side of the state. A small airport in the city of Fargo was shut down and all flights were canceled.

The severe weather arrived as many Americans were traveling for the Christmas holiday.

Dallas-Fort Worth International Airport in Texas a major hub for American Airlines through which more than 200,000 holiday travelers were expected to pass, experienced the heaviest disruptions. More than 450 flights were canceled and more than 600 others were delayed.

"By the time we get where we're going, it'll be time for us to come back. Now we've got hotel rooms, no luggage, no clean clothes and no guaranteed flights until Saturday."

The National Weather Service forecast heavy snow and gusty winds would persist through early Friday in north central states while heavy rainfall, with potential flash flooding, was possible in parts of the South.