Portugal's civil protection agency said the 15 biggest fires, which had raged through the centre and the north of the country, had been brought under control, but the death toll rose. 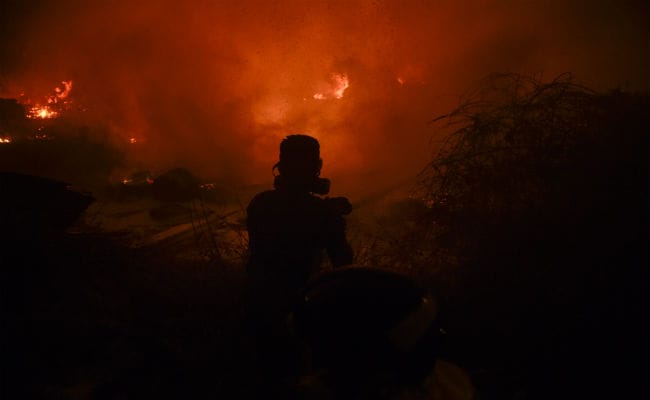 Penacova, Portugal: Overnight rain and calmer winds on Tuesday helped firefighters tame a spate of deadly wildfires that broke out over the weekend, devouring homes and killing 41 people in Portugal and another four in northern Spain.

Portugal's civil protection agency said the 15 biggest fires, which had raged through the centre and the north of the country, had been brought under control, but the death toll rose.

As the country began three days of mourning for the victims, the agency said 71 people had been injured in the fires, 16 of them seriously. And one person was still missing.

Among the dead was a one-month-old baby.

"Most of the victims were killed in their cars, but we also found them inside their houses," said Jose Carlos Alexandrino, mayor of Oliveira do Hospital near Coimbra, speaking to broadcaster RTP.

"The whole city looked like a ball of fire, surrounded by flames on all sides."

Across the border in Galicia, Spain's westernmost province which flanks northern Portugal, the number of dead rose to four from fires which also broke out on Sunday and were stoked by warm winds as Hurricane Ophelia passed the Iberian Peninsula.

The latest victim was a 70-year-old man who died on Monday in Vigo, a city on the coast. But by Tuesday, officials said they had lowered the alert level after early-morning rain and calmer winds halted the progression of the flames.

For Portugal It is the second time in four months that it has been hit by deadly wildfires after huge blazes inJune killed 64 people, the worst fires in the country's history.

"We went through absolute hell, it was horrible. There was fire everywhere," a resident of the central town of Penacova told RTP television.

Further north, villagers from the Vouzela area spoke of how fast the fire spread.

"Everything happened in 45 minutes, the fire came to the foot of the village and spread at an incredible rate," resident Jose Morais told AFP.

"I had never seen anything like that before. It felt like the end of the world. Everyone fled".

Despite the rain, the civil protection agency said that around 3,000 firefighters remained deployed to tackle any resumption of the blaze, but that there had been no major active fires burning since dawn.

In the villages near Penacova, about 230 kilometres (140 miles) north of Lisbon, life began to resume some semblance of normality with residents hosing down their land to prevent further blazes.

Others were examining their crops and olive trees to gauge the extent of the damage.

In the forests around Coimbra, a city on the banks of the Mondego River, plumes of white smoke filled the air as firefighters continued working to douse the flames on a hillside covered with blackened ash.

"There was a lot of rain during the night but not enough to completely put out the fire," a senior fire officer told Portuguese news RTP, saying the main difficulty for firefighters was the sense of fatigue and the scope of the area they had to work on.

The blazes which broke out on Sunday were blamed on arsonists and fanned by the passing of Ophelia.

Lisbon declared a state of emergency in areas north of the Tagus river, the longest river in the Iberian Peninsula which effectively cuts Portugal in half and also runs through Spain.

For the second time in four months, Portugal held a three-day mourning period, while in Brussels, the European Commission's flags were lowered to half-mast as a sign of respect for victims in both countries.

Since the start of the year, more than 350,000 hectares (865,000 acres) of vegetation have been consumed by wildfires across Portugal -- four times the annual average over the past decade -- according to an estimate from the European Forest Fire Information System (EFFIS).

Portugal is covered with fast-burning eucalyptus trees which are used to supply the country's paper industry, and it is also vulnerable to strong winds coming off the Atlantic.

Promoted
Listen to the latest songs, only on JioSaavn.com
In Spain, Prime Minister Mariano Rajoy blamed arsonists for most of the deadly wildfires, saying: "What we are experiencing here does not happen by chance."