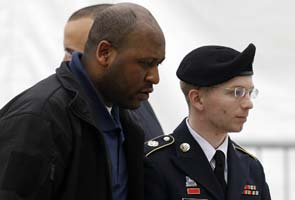 London: It's rare for an American to generate more sympathy abroad than he or she does at home, but Bradley Manning and his trial are unique in a host of ways.

With Manning's trial heating up in the United States, where he is accused of aiding the enemy by leaking classified material to WikiLeaks, his vocal supporters in Britain and Europe are once again rallying to his side.

While support for the imprisoned soldier may be weak in the U.S., Manning - a dual U.S. and British national by virtue of his Welsh mother - has a solid band of supporters in Britain.

In countries with no national secrets at stake in the trove that WikiLeaks unleashed on the Internet, many have seized upon Manning's case as a focal point for a wide range of human rights issues, from the ethics of waging preemptive wars abroad to the protection of individual freedoms on the Internet. Many saw his harsh treatment in a U.S. military prison as a violation of his own human rights.

"Every solder in every nation has a duty to expose war crimes. That's what Bradley Manning did," said Peter Tatchell, a British gay rights activist who has taken part in the "support Manning" movement. "In many ways, Manning is a true patriot because he's sought to uphold the U.S. constitution. Thanks to Bradley, the American people now know the truth."

Manning - a 25-year-old former intelligence analyst from Oklahoma who is accused of leaking more than 700,000 U.S. battlefield reports and diplomatic cables - has also drawn support from members of the Occupy movement, an international grassroots campaign that has opposed corporate greed.

Naomi Colvin, an Occupy activist who has also rallied for Manning, said peoples' attitudes toward Manning, an openly gay soldier, are more open-minded in Britain than in America.

"It's much less politicized here than in the U.S. It's not really about 'Is Manning a traitor or not?' - that's never been the central question here," she said.

Instead, Colvin said she and her fellow activists were more concerned with the rights abuses that Manning exposed - and the humiliation he was subjected to in his detention. When the group first starting lobbying on Manning's behalf, its focus was on the mistreatment of a U.K. citizen abroad, she said.

Manning's assertion that he was kept in isolation for months and stripped to his underwear every night while in pretrial detention helped build support for him from rights organizations around the world.

Some Americans have taken the same stand in support of Manning, and free speech advocates have backed his cause, but in general they are harder to find in the U.S.

Manning admitted in court in February that he had provided a vast number of documents to WikiLeaks.

In London, protesters have held vigils and demonstrations outside the U.S. Embassy to demand better treatment for Manning, most recently on Saturday. More rallies are planned in the coming weeks, Colvin said.

Nathan Fuller, a campaigner for the Support Bradley Manning Network, said from Fort Meade in Maryland that when the group marked Manning's 1,000th day in prison in February, half of its events took place outside the U.S., in countries ranging from Uganda to Australia and Germany.

Backing for Manning has come from an official level, too. In a 2011 report, Council of Europe rapporteur Dick Marty praised Manning for uncovering information about the secret rendition of terror suspects. Marty blasted the "cult of secrecy" in western governments and defended the "fundamental role" that whistleblowers like Manning play in society.

Left-leaning segments of Britain's diverse press have been largely sympathetic to Manning's cause, particularly when compared to media coverage in America.

The Guardian newspaper, which has given the Manning and WikiLeaks cases extensive coverage, said 2,500 of its readers voted in favor of Manning winning the Nobel Peace Prize in 2011 - more support than any other candidate received.

On Tuesday, commentators in The Guardian again praised Manning, with one saying he had risked everything to stand up for truth.

It may be easier for the British press, and newspapers in other countries, to be sympathetic to Manning's point of view because the secrets he made public deal with the American military and U.S. diplomats and not their own soldiers and envoys.

"Part of that is the mainstream press here doesn't cover the same ideological turf that it does in the U.K. or elsewhere," he said. "But I'd suspect most of it is the mundane fact it's American interests he's accused of threatening, and that people accused of 'aiding the enemy,' rightly or wrongly, tend not to get the most flattering coverage in their home country."

Promoted
Listen to the latest songs, only on JioSaavn.com
Tim Price, a British playwright who wrote a sympathetic play about Manning's teenage years in Wales called "The Radicalization of Bradley Manning," said the harsh media coverage in the United States had exposed a blind spot in the U.S. press.

"I think the U.S. media has been unable to make the leap that Bradley might actually be the one soldier defending American ideals and principles - and the U.S. military is the party guilty of putting soldiers at risk on a daily basis by waging wars with little idea how to end them," he said.
Comments
WikiLeaks trial