Police psychologists explain what might have gone wrong and what the consequences are likely to be for former deputy Scot Peterson. 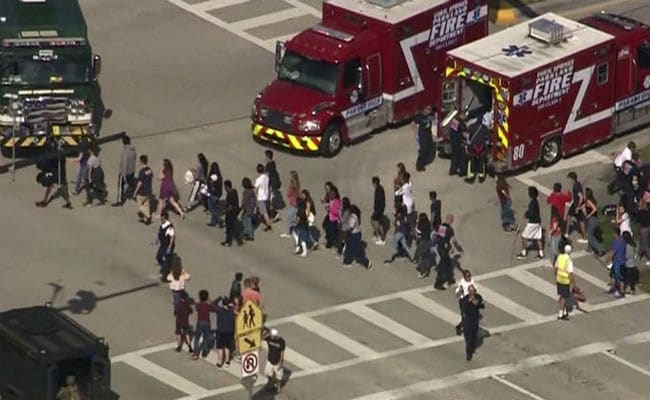 17 people were killed in the Florida's Parkland school mass shooting.

The sheriff deputy was armed and in uniform, standing outside the Florida school where a gunman was methodically killing students, authorities said Thursday night. And yet he did nothing.

In the hours since authorities described the deputy's response, he has been vilified by his own department, the community and the president.

The deputy, Scot Peterson, "clearly" knew there was a shooter inside, Broward County Sheriff Scott Israel said at a news conference, something that Israel said made him "sick to my stomach."

President Donald Trump called Peterson a coward. "When it came time to get in there or do something, he didn't have the courage," Trump told reporters Friday morning.

The 54-year-old deputy, a resource officer at the school since 2009, has resigned. Peterson had served with the Broward County Sheriff's Office since 1985, and was considered a trusted and exemplary deputy, according to performance reviews reported by the South Florida Sun Sentinel.

What could have been going though his mind that stopped him from going in? And what usually happens afterward to a first responder who fails to respond?

Most people are familiar with the classic psychological responses to threat: fight or flight. These evolutionary responses are found throughout the animal world.

"What police are called on to do is not natural," said Ellen Kirschman, a clinical psychologist who has worked with police departments across the country for more than 30 years. "Instead of running away from danger, they run toward it."

No one except Peterson knows exactly what happened, Kirschman said, but she has worked with officers in the past with similar experiences. One officer she counseled had been involved in a shooting incident. On his first night back on patrol, he encountered almost the same situation.

"He got these suspects out of their car and onto the ground, but once he pointed his weapon at them, he could no longer move," she said. "When other officers arrived, they could barely pry his fingers off the gun."

When our brains perceive danger, adrenaline floods our body. The amygdala, a part of the brain in charge of emotional responses, becomes more active and can overrule the prefrontal cortex, which is in charge of nuanced cognitive functions like complex decision-making. Our senses can become distorted. Many officers describe experiencing tunnel vision or tunnel hearing, where they become entirely focused on something like a suspect's gun or voice. Their sense of time becomes similarly distorted.

"You are not processing things like you normally would," Kirschman said.

For some animals, such as deer or opossums, the freeze response immobilizes them so a motion-sensitive predator will not see them or will lose interest.

Police officers do undergo extensive training to help them overcome instinctive responses to a crisis.

"You see this for soldiers, firefighters, pilots. The training serves as a kind of stress inoculation. It puts you in that exact scenario so you see this is how your body responds and this is how you fight through that and overcome it," said Steve Albrecht, who was a San Diego police officer for 15 years and author of several police tactic books.

Pilots, for example, are put into flight simulations in which their plane is crashing. Firefighters practice regularly how to run into burning structures.

For police, the training often begins from the moment they become an academy cadet. And among crisis scenarios, an active shooter is perhaps the most dangerous and difficult.

The problem, he said, is that for many police officers, that training often doesn't continue on regular basis.

"With the budget realities most departments are facing these days, officers like him may only get hands-on training once a year, if even that. That's not enough. The instincts wear off. Without that repetition, the imprinting of responses to your body and mind, it can't take place."

It's easy for officers to lose focus if they rarely encounter danger. "If yesterday the school was completely boring, and the day before that and the one before that, when that suddenly changes it's stunning to you," Albrecht said. "Officers need to engage in tactical daydreaming every once in a while. Walking through scenarios about how bad things could get and steps you would take to respond to that. I'm guessing this guy didn't do any of that stuff."

"On the one hand, feel bad for him; on other hand, if you can't engage with danger of the situation, you should quit and sell shoes," Albrecht said. "This is why we have police."

With all the public scrutiny and vilification of the deputy at the school, several police psychologists expressed worry about his mental well-being.

"I would not want to be in that man's shoes," said Kirschman, the police psychologist. "The guilt and self-blame he must be feeling, let alone what's being heaped on him from the outside. After something like this happens, I've seen officers torment themselves sometimes to the point of suicide."

Kirschman said she is especially concerned because Peterson has resigned. "I don't know what kind of support or counseling he'll get since he resigned. I don't know what happens to his medical benefits," she said. "He needs counseling with someone who knows police work. His family will need support."

Officers involved in controversial shootings often experience a sense of betrayal, she said. "The betrayal makes the experience much harder. You feel betrayed by the community you risked your life to protect. Betrayed by your own friends in the department. Betrayed by the administration that's throwing you under the bus," Kirschman said.

"The funny thing about police departments is that when you're recruited, police are told, 'We have your back.' The family in blue and all that. But in high-attention situations like this, you see departments quickly turn against their own officers when they need support most."

Because of the mental vulnerability of police after shootings, many departments routinely send officers for a psychological exam.

"It's like a checkup to make sure they're OK," said Laurence Miller, a clinical psychologist who works with the West Palm Beach Police Department and Palm Beach County Sheriff's office. Initially, many have trouble sleeping. The adrenaline fades and their bodies crash, he said. Some find themselves mulling over the incident over and over in their minds.

"It's tough because when the second-guessing from others begins, it's usually that you overreacted or underreacted. And there's very little area in between," Miller.

Miller sees the deputy's freezing reaction as one clear reason against a proposal, now being pushed by the president and the National Rifle Association, to arm teachers across the country.

Promoted
Listen to the latest songs, only on JioSaavn.com
"This is a problem we see among trained law enforcement professionals. What's impressive is that most of the time they don't freeze. They're able with training to do their best in a situation," said Miller, who is regularly brought in to counsel officers after shootings. "Now imagine putting teachers in that same position. It's a recipe for disaster. It's not just a question of them freezing or not, but who becomes liable when teachers react poorly and end up killing a student?"