The massive urban garden is now open for employees to hold meetings beside a cascading waterfall, brainstorm in a third-story "bird's nest" or crack open their laptops and work amid a lush array of ferns and tropical plants. 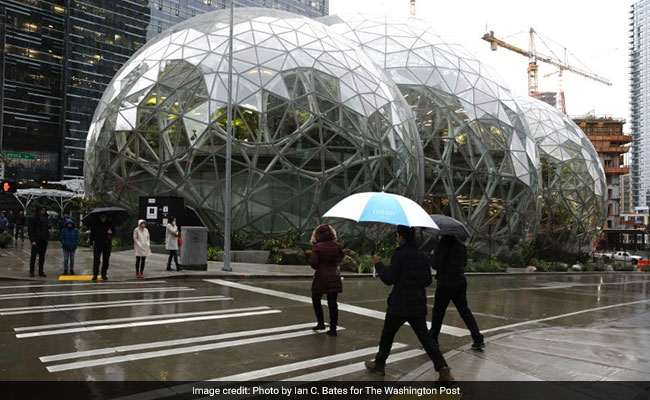 SEATTLE: Microsoft employees have treehouses. Apple workers have what's been called a spaceship. And now Amazon's staffers have a rainforest - or at least something like one - right in the middle of downtown Seattle.

On a typically overcast Monday, in a particularly Amazonian version of a ribbon-cutting ceremony for "the Spheres" - its giant glass-and-metal domes filled with tropical and rare plants - CEO Jeff Bezos asked the gathered attendees to look to the ceiling. A circular blue ring lit up, and the Amazon founder summoned its artificial intelligence assistant, Alexa, to officially open the building. (Bezos is also the owner of The Washington Post.)

"Okay, Jeff," Alexa's familiar voice sounded, as lights switched on and misters sprayed some of the more than 40,000 plants that stock the company's newest headquarters building. This architectural showstopper is a new Seattle landmark and Amazon workplace tool that could help the retail giant attract, retain and enhance the productivity and well-being of its fast-growing workforce. After more than six years of planning and construction, the massive urban garden is now open for employees to hold meetings beside a cascading waterfall, brainstorm in a third-story "bird's nest" or crack open their laptops and work amid a lush array of ferns, tropical plants and a 50-foot ficus tree nicknamed "Rubi." For now, Amazon employees will have to reserve a time slot to enter the building, but over time will be able to come and go from what executives call an "alternative workspace" that's aimed at boosting collaboration and creativity.
While much of the nation has been obsessed with where Amazon will build its second headquarters, the focus Monday was on its hometown, where a gathering of Amazon executives and local officials - including Washington Gov. Jay Inslee and Seattle Mayor Jenny Durkan - appeared. 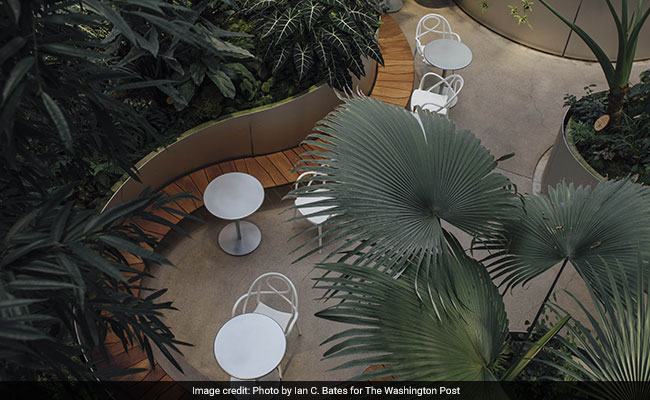 The architecture includes more than 620 tons of steel and 2,643 panes of glass and no enclosed offices

"We wanted to create a unique environment for employees to collaborate and innovate," said John Schoettler, Amazon's vice president of global real estate and facilities, describing the initial ideas he and Bezos had to transform the old motels and surface parking lots that populated that area of downtown. "We also asked ourselves what was missing from the modern office, and we discovered that that missing element was a link to nature."

The striking architecture, designed by the firm NBBJ, includes more than 620 tons of steel and 2,643 panes of glass and no enclosed offices, desks or conference rooms. But the plants take center stage in the spheres, which cover half a city block downtown, sandwiched between two Amazon headquarters towers. A four-story "living wall" of plants towers over the sphere's interior. Rubi, the ficus tree originally planted at a tree farm in California in 1969, was lowered by crane through a temporary opening and replanted.

More than 400 species of plants, many of which are typically found in high tropical or subtropical altitudes and require cool temperatures, stock the three large domes, which come with an earthy, forest-like scent reminiscent of a botanical garden conservatory - but without the especially humid conditions that would be unacceptable to most workers. Asked about the choice of a tropical forest setting and Amazon's name, the company's senior manager of horticultural services, Ron Gagliardo, said "any connection to the Amazon rainforest is purely coincidental." 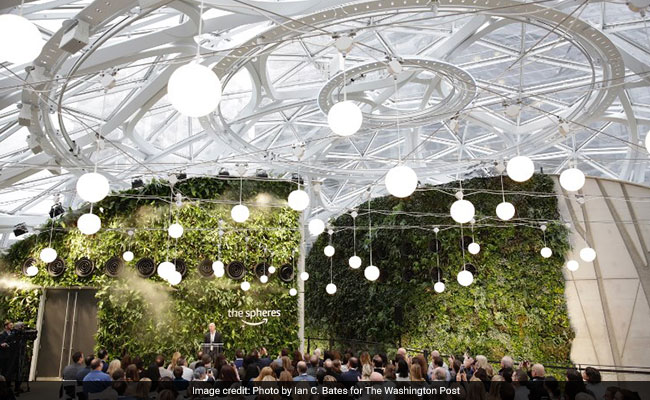 Jeff Bezos called the Spheres an "incredibly complex" project and a "remarkable environment."

But Gagliardo did say the space is based on data that show it's good for employees' well-being to be around plants and sunlight and encourages Amazon's employees to "find their inner biophiliac that really responds to nature," referring to a design concept based on the human tendency to seek out natural surroundings. "We get them away from their normal desk environment. You don't see desks or cubicles. You kind of convene with nature."

Workplace experts said The Spheres is an example of how the largest tech companies are taking those concepts to new heights. Research has shown that spending time in nature can increase performance on creative problem-solving tasks by 50 percent, as well as that adding plants to office settings can increase productivity by 15 percent. Multiple studies have linked greater daylight with improved worker health, productivity and ethical behavior.

Yet a 90-foot-tall biosphere stocked with "cloud forest ecosystem" plants moves that idea well beyond the typical application of putting more cubicles near windows or adding a few plants to a sky-lit atrium.

"This is a whole other level," said Jonathan Webb, vice president for workplace strategy at office furniture maker KI. While the design principle of "biophilia" may have health benefits, "it also has to do with workplace productivity. That's the holy grail in our world." 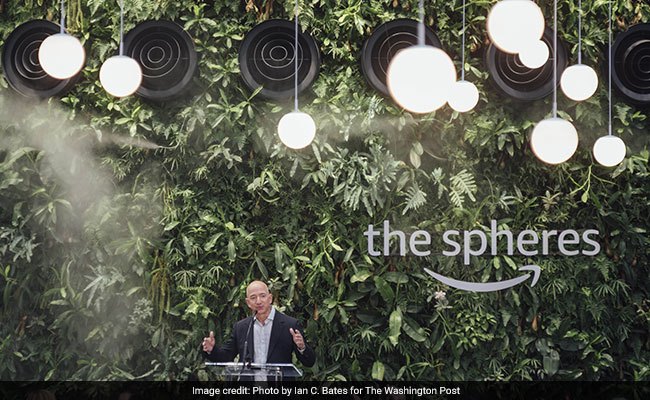 More than 400 species of plants stock the three large domes

As the largest tech companies face a fierce battle for talent, a green-friendly building designed by high-profile architects appears to be fast replacing ping-pong tables and gourmet chef-managed cafeterias as the new must-have perk for workers.

Apple opened its "spaceship" campus, Apple Park, in April, featuring the world's largest panels of curved glass, more than 9,000 trees and a blurring of the boundaries between nature and workspaces. Across Lake Washington from downtown Seattle is Redmond, where Microsoft recently built treehouses by Pete Nelson, host of Animal Planet's "Treehouse Masters," for employees to meet and work. The company also announced it was revamping its main campus there, a project that will include new biking and walking trails.

Meanwhile, Google is proposing a major new terraced complex in Sunnyvale, California, where employees will be able to move from one floor to the next by walking down a sloping outdoor path, as well as a new tent-like campus in Mountain View with "smile-shaped" clerestory windows and a "green loop" of indoor/outdoor spaces that wind through the building. Facebook's recent Frank Gehry-designed headquarters includes a nine-acre rooftop park.

"If you're going to be in Seattle and be a programmer, the biggest options are Amazon and Microsoft," Webb said. "They have to keep up. To me, it's all about attraction and retention. The unemployment rate is almost at an all-time low." 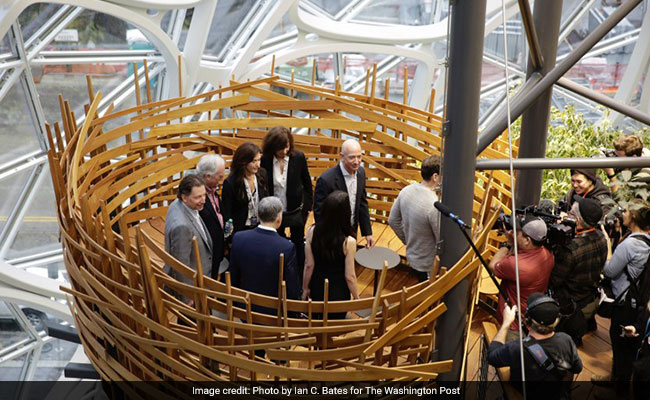 For now, employees have to reserve a time to spend in the Spheres.

Schoettler said in an interview that the Spheres was more like the "icing on the cake" than the "linchpin" of how Amazon's real estate could help it recruit workers in a competitive market for talent. He believes Seattle's urban setting is a bigger factor in attracting workers and said he would not speak to what other technology companies are doing. "We just thought this would be a super opportunity to do something really unique on this piece of property."

Promoted
Listen to the latest songs, only on JioSaavn.com
Plenty of Amazon's local workforce - Seattle is currently home to some 40,000 of Amazon's more than 500,000 global workers - at least, appear to agree. Schoettler said the reservation system for workers to check out the domes, which hold up to 1,000 people at one time, is booked through April.