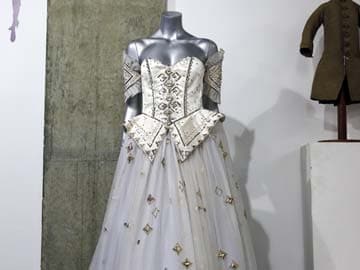 A 1986 Emanuel ball gown worn by late Princess Diana is displayed on a mannequin during an auction in London, on December 3, 2013.

London: A lavish, white and gold ballet-inspired ball gown worn by Princess Diana has fetched
102,000 pounds ($167,000) at a London auction.

The Kerry Taylor Auction said that the strapless gown, which features gold sequins,
rhinestones and pearl beads, was not designed for Diana - but the royal chose it
herself from a collection by her favourite designers, the Emanuels.

The auction house said that Diana wore the dress, which came with a matching
headband and optional sleeves, on various occasions.

It said that the dress' auction price exceeded initial estimates and went to an unidentified
museum abroad.