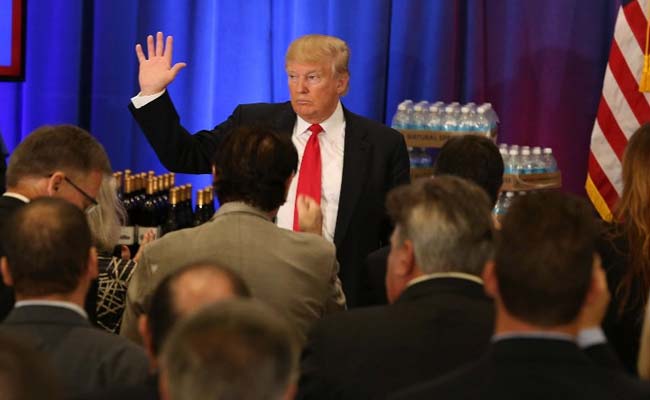 Washington, United States: By his own admission, Donald Trump has no foreign policy advisors.

But that hasn't stopped the billionaire real estate developer from making outrageous declarations on his foreign policy plans if elected president.

So far, the Republican frontrunner has said he would force Mexico to build a border wall to keep illegal immigrants out of the US.

He wants to deport 11 million illegal immigrants, ban Muslims from entering the country and suggested wiping out the ISIS terrorist group with a massive military operation.

"I think Islam hates us," he declared about the world's second-largest religion with 1.6 billion followers.

Trump threatens trade war with China, Japan and Mexico if they don't "behave," and wants a closer relationship with Russian President Vladimir Putin, whom he admires.

There's no clarity on who will guide his foreign policy or whom he would consider tapping as his Secretary of State.

Asked by MSNBC who will be the "giants" on his foreign policy team, the Republican candidate said Tuesday: "Yes, there is a team," before immediately backtracking.

"Well, there's not a team," he acknowledged. "I have met with far more than three people, and I will be forming a team at the appropriate time."

The businessman with no political experience boasted of the support of a Republican senator from Alabama, Jeff Sessions, and noted his "great respect" for Richard Haass, a former diplomat and head of the New York-based Council on Foreign Relations.

Haass acknowledged meeting Trump in August, but made clear in a Twitter post he does not endorse candidates but has briefed several, both Democrats and Republicans.

Privately, US diplomats say their foreign counterparts are concerned about the effects of a Trump presidency on the country's relationships with the rest of the world.

From the very beginning of his campaign, Trump has accused Mexico of sending drug dealers, criminals and rapists across the border into the United States.

To stop illegal immigration, Trump has proposed not only building a giant wall along the southern US border but also forcing Mexico to pay for the project estimated to cost $8 billion.

Mexican President Enrique Pena Nieto has made clear "there is no scenario" in which his country would pay for a wall. He also criticized Trump's "strident rhetoric," comparing it to the rise of dictators Adolf Hitler and Benito Mussolini.

Trump said in November he had seen pictures of Muslims in the United States celebrating after the terror attacks on September 11, 2001 -- an urban legend that has been debunked.

But Trump has called for a ban on Muslims entering the country, to keep out would-be terrorists.

On Wednesday, he went even further, telling CNN: "I think Islam hates us."

He repeated the assertion the following evening during a debate with his Republican rivals, saying "many" of the world's 1.6 billion Muslims "hate" America.

Washington has been pounding ISIS targets in Iraq and Syria with an air campaign. Trump has proposed a solution to the threat posted by the extremist group: "Cut the head of ISIS and take their oil."

He has also promoted torturing terrorists and targeting their family members.

Trump then changed his tune and said that if elected, he would respect the laws of the country.

Later, he again amended his position, announcing what he would do is amend the law banning torture, a necessary step because "we are playing by the rules, but they have no rules."

While relations between Washington and Moscow have been strained for years, Trump often defends Putin, calling the Russian president "a powerful leader" and saying he would "get along very well" with him.

Putin has returned flattering comments, hailing the "tremendous" Trump as "talented without any doubt."

"It's not good when you don't have the right people representing you," he said, promising better negotiated deals in the future and protectionist measures or trade wars against China, Japan and Mexico.

He also accused China and Japan of currency manipulation.

"There is a serious threat from Trump of a real protectionist backlash imposing new tariffs on imports," said Edward Alden of the Council on Foreign Relations.