What to Call Iraq Fighters? Experts Vary on S's and L's 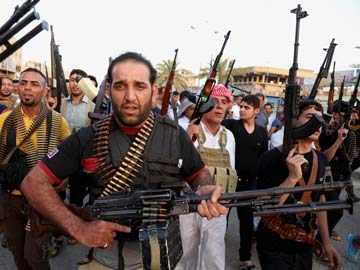 Everyone seems to agree that the Sunni extremists who are striving to carve out a caliphate in Syria and Iraq have upended the region, but there is no consensus on what to call the militant group, in English at least.

Many news outlets, including The New York Times, have been translating the group's name as the Islamic State in Iraq and Syria, or ISIS for short. But the U.S. government and several news agencies, including The Associated Press, call it the Islamic State in Iraq and the Levant, or ISIL. (The BBC, curiously, uses the ISIS acronym, but "Levant" when spelling the name out.)

Neither way is an exact rendering of the group's Arabic name, al-Dawla al-Islamiya fil-Iraq wa al-Sham. The difficulty comes from the last word.

Al-Sham is the classical Arabic term for Damascus and its hinterlands, and over time, it came to denote the area between the Mediterranean and the Euphrates, south of the Taurus Mountains and north of the Arabian desert. Similarly, in Egypt, "Masr" may refer either to Cairo or to the whole country. Used in that sense, al-Sham takes in not just Syria but also Israel, Jordan, Lebanon and the Palestinian territories, and even a part of southeastern Turkey.

That is fairly similar in extent to what Western geographers call the Levant, a once-common term that now has something of an antique whiff about it, like "the Orient." Because of the term's French colonial associations, many Arab nationalists and Islamist radicals disdain it, and it is unlikely that the militant group would choose "Levant" to render its name.

The fighters do not like "Syria" either, though. Syria is what the Greeks named the region in ancient times, possibly after the Assyrian people who once lived there, though that derivation is disputed. And at times in the past,  the term "Syrian" was used to mean specifically a Christian Syrian, while Muslims or Jews living there would be called Shami. Today, when Arabs speak of Syria, they usually mean only the modern state, which the insurgent group is fighting to obliterate.

Historic resonances are the point, said Ali Adeeb, a professor of Arabic at New York University.

"When they first thought of the name," Adeeb said of the group, "they were thinking with the mentality of the seventh or eighth century, just like their interpretation of religion and the life they want to recreate." He noted that in the group's statements, "they use old words like 'ghazwa' for invasion, instead of the modern word for battle."

So if neither "Levant" nor "Syria" will do to translate "al-Sham," what would? Some writers and geographers use "Greater Syria," which preserves the distinction with the current state. But that would come at the cost of adding an adjective that is not present in the original Arabic, not to mention cluttering the acronym. Or the already familiar ISIS abbreviation could simply be said to stand for Islamic State in Iraq and al-Sham, though the last word is unfamiliar to English speakers.

Speaking of the acronym, there is no consensus on how to pronounce ISIS, either. Many people say "eye-sis," the way most English speakers would pronounce the name of the ancient Egyptian goddess Isis. When an English word begins with I, followed by a single consonant and another vowel, the long I sound is generally used.

But "ee-sis" is also frequently heard, perhaps because these days both Iran and Iraq are often pronounced beginning with a long E sound.

Promoted
Listen to the latest songs, only on JioSaavn.com
So far, those using the Levant version seem to be speaking the abbreviation letter by letter - "eye, ess, eye, ell" - more often than making an acronym out of it.