Musk's jet logged more than 250 flights for his work, pet projects and vacations across Asia, Europe, Latin America and the Middle East during a year when he said his electric-car giant was losing up to $100 million a week Tesla chief Elon Musk's corporate jet flew more than 150,000 miles last year, or more than six times around the Earth, as he raced between the outposts of his futuristic empire during what he has called "the most painful year" of his career, according to flight records obtained by The Washington Post.

The billionaire executive's frequent travel on a private plane was paid for by Tesla, the cash-burning automaker that faces billions of dollars in debt and has laid off thousands of employees within the last year, including slashing 7 per cent of its workforce this month.

Musk's jet logged more than 250 flights for his work, pet projects and vacations across Asia, Europe, Latin America and the Middle East during a year when he said his electric-car giant was losing up to $100 million a week and teetered on the brink of collapse.

But Musk's relentless schedule was eased by a level of convenience and luxury few but the ultrawealthy can afford. Some of the flights were recreational getaways for Musk or his family, while others involved moving the plane from one side of Los Angeles to the other to help Musk shorten his commutes. 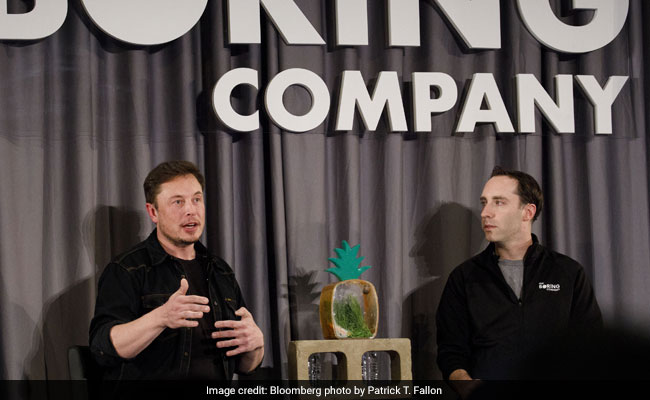 The company will face questions about its spending when it reveals its annual earnings report Wednesday, and investors will be looking closely to see whether Tesla will squeeze out a profit despite deep losses earlier in the year.

The frenzy of air travel was a key part of Musk's journey to becoming a global celebrity, showing how suddenly his attention could switch between his ambitious ventures on cars in California, batteries in Nevada, tunnels in Chicago and rockets in Florida.

It provides a glimpse at the wild life of America's most polarizing tech superstar, underscoring the chaos of a year in which he savaged his enemies as idiots and pedophiles, smoked weed during a live interview and got sued by federal authorities accusing him of misleading investors - a move that cost him his chairmanship on Tesla's board.

But it also reveals an awkward dynamic for one of the world's most outspoken crusaders of renewable energy: In September, a few days after calling fossil fuels "the dumbest experiment in human history," his plane burned thousands of pounds of jet fuel flying 300 miles from L.A. to Oakland, California, so Musk could view a competitive video-gaming event.

"We know we'll run out of dead dinosaurs to mine for fuel & have to use sustainable energy eventually," Musk tweeted in November on the same day his jet flew over Mexico for what Tesla says was a personal trip. "So why not go renewable now & avoid increasing risk of climate catastrophe?"

Musk was not made available for comment, but a Tesla spokesman said his heavy air travel was an indispensable part of doing business. "Until we can teleport, there's unfortunately no alternative that would allow him to do his job as effectively," spokesman Dave Arnold said.

Musk is worth more than $20 billion, but his companies have footed the bills for the jet's fuel, maintenance, crew and other expenses. In a June financial filing, Tesla said Musk's rocket company SpaceX operated the plane and sent Tesla a tab worth roughly $700,000 in 2017.

The company said Tesla does not cover the costs for Musk's personal trips but declined to specify how it designates what constitutes personal travel. The company also declined to offer an estimate for Musk's flight costs last year, when data show the jet's air travel increased. Tesla said it also covered the expenses of a second aircraft owned by Musk, paying another $46,000 in 2017.

Though Musk has often bemoaned "soul-destroying" traffic as the inspiration for his business interests in high-speed tunnels and self-driving cars, he has spoken little about his secret weapon for avoiding it: a 2015 Gulfstream G650ER that sells for about $70 million. It is one of the world's fastest and largest ultra-long-range executive aircraft; only a few hundred have been made.

The Post obtained the flight data from an industry official, who provided it on the condition of anonymity, and confirmed details through Freedom of Information Act requests with the Federal Aviation Administration. The data does not show who was onboard during the flights, but aspects of Musk's travel were confirmed by his public appearances, interviews and tweets. 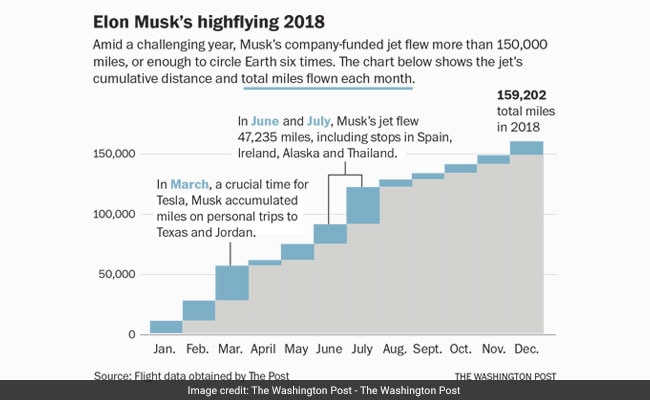 Musk is far from the only corporate leader to depend on the speed, flexibility and privacy of flying across the world on a private plane, and his high-profile role as chief executive, visionary and hype man for multiple companies helps explain why he would rely on it so heavily to get around.

Charles Elson, director of the John L. Weinberg Center for Corporate Governance at the University of Delaware, said Musk's travel for vacations and side projects on a Tesla-funded jet was symptomatic of a troubling executive culture, in which public shareholders pay to subsidize the life of their company's "superstar."

Musk has characterized 2018 as an agonizing year for the companies he said teetered between "life or death." The company's survival, he said, was due in large part to his herculean workload and self-sacrifice, including sleeping on the Tesla factory floor and working 120-hour weeks. "However hard it was for" his employees, he told "60 Minutes," "I would make it worse for me."

But the flight records reveal some gaps in Musk's self-assessment of a ceaselessly "excruciating" year. In a New York Times interview last summer, Musk said he spent his 47th birthday working nonstop in the Tesla factory "all night - no friends, nothing," before flying to his brother's wedding in Spain, saying he arrived shortly before the ceremony and left immediately afterward to rush straight back to work.

The interview did not mention, however, that Musk actually left the ceremony on the Spanish coast and flew to northern Ireland, where he visited the film set for the HBO fantasy epic "Game of Thrones" with his children and ate dinner at a Belfast pub, according to local media reports. ("Belfast is beautiful," Musk tweeted after the trip.) That trip was three weeks after Musk announced Tesla would lay off about 3,500 employees, or 9 percent of its workforce, as part of a reorganization he called "difficult, but necessary."

A Tesla official said it was the Times' characterization, not Musk's, that he left immediately afterward, but that Musk did cut short his participation in wedding festivities scheduled to last several days.

The jet is registered to a subsidiary of SpaceX called Falcon Landing, named for its reusable rocket, Federal Aviation Administration records show. Musk or his associates took an additional step, common among top business executives, to request the travel not be logged on public flight-tracking databases.

Many of the flights took off from or landed at L.A.'s Van Nuys airport, a short drive from the tony neighborhood of Bel Air where Musk owns five separate mansions. It was on an August drive to his jet there, Musk told the Times, that he tweeted Tesla had the "funding secured" to be taken private - a market-shaking promise that ultimately fell flat. Musk and Tesla later agreed to pay a $40 million settlement and institute new safeguards to resolve a Securities and Exchange Commission case alleging Musk had misled investors about the deal's prospects.

Musk's jet flew roughly 75 times last year to the San Jose airport, the closest stop to Tesla's headquarters in Palo Alto and car-making factory in Fremont, California, where Musk often said he was so busy he would end up sleeping among the machines. Dozens of other flights were made to airports near SpaceX's headquarters in Hawthorne, California, and the battery-producing Gigafactory outside Reno, Nev.

Tesla said Musk never used the plane to fly between different spots in Los Angeles. But the jet would fly to meet him at a closer airport if, say, he began his workday at SpaceX's office on the south side of L.A. and the plane was on the north side, the company said. Some of these repositioning flights only went about 20 miles, the aircraft data show.

Musk's trips could be a whirlwind of business pursuits, with his role quickly switching from one venture to the next. In early June, Musk flew to a SpaceX office outside Seattle, where he fired a number of high-ranking officials working on a satellite project, unnamed company employees told Reuters. The flight records show Musk returned to California shortly after and, within days, was on a flight to Chicago to advocate alongside Mayor Rahm Emanuel for a government-backed tunnel system, built by Musk's new tunnel-transit business The Boring Company. 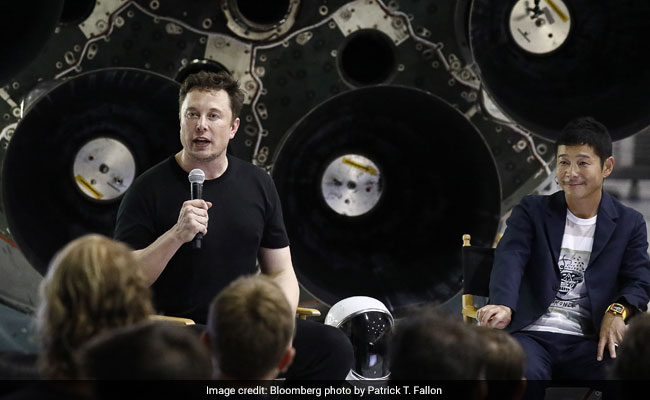 But the jet also allowed Musk to skip commercial air travel when he took some time off. In the first three months of 2018, a quarter during which Tesla's investor pressures were boiling over and the company burned through more than $1 billion in cash, the jet flew more than 50,000 miles, including for a vacation in Chile, a tour of the set for the HBO robo-drama "Westworld" in Texas and a spring-break trip with his kids to Jordan and Israel.

In May, a few days after berating financial analysts for what he called "boring bonehead questions" about Tesla's spending, Musk took the jet to New York, where he attended the glitzy Met Gala with his then-girlfriend, the electronic musician Grimes.

On Musk's most infamous trip last summer, a few days after he had returned from his brother's wedding, he flew to Thailand for the delivery of a mini-submarine he said could help save a youth soccer team trapped in a sunken cave. The vessel went unused in the rescue, but shortly after his trip home, Musk told his tens of millions of Twitter followers a rescue volunteer who had criticized Musk's mini-sub was a pedophile. That volunteer, Vernon Unsworth, has sued Musk in an ongoing lawsuit. Musk's lawyers defended the comments as having arisen from a social-media "schoolyard spat."

Musk's jet soared as his companies faced escalating pressure from Tesla shareholders over the company's cash burn, which totaled hundreds of millions of dollars a month. In June, when Tesla laid off 9 percent of its workforce, Musk emailed employees that they were "making this hard decision now so that we never have to do this again." Earlier this month, Musk again emailed workers that the company had "no choice" but to cut another 7 percent of its full-time staff and many more temporary workers and contractors. "There isn't any other way," he said.

The cuts have fed new doubts from Wall Street that Tesla can transform into a reliably profitable car company, and its stock has plunged more than 20 percent from its 2017 peak. Musk's problems have expanded into other parts of his empire, too: Tesla's most recent mass layoff came in the same week that SpaceX announced it would be terminating 10 percent of its employees, saying it must "become a leaner company."

Musk, however, has shown few signs of sticking to a leaner flight itinerary. He ended 2018 the way he began it, with an international flight: a private business trip to Shanghai.