Studying animal tools can help scientists understand the origins of our own Stone Age, which began when our ancestors picked up rocks around 2.6 million years ago. But tools wielded by beak, paw or snout are rare. 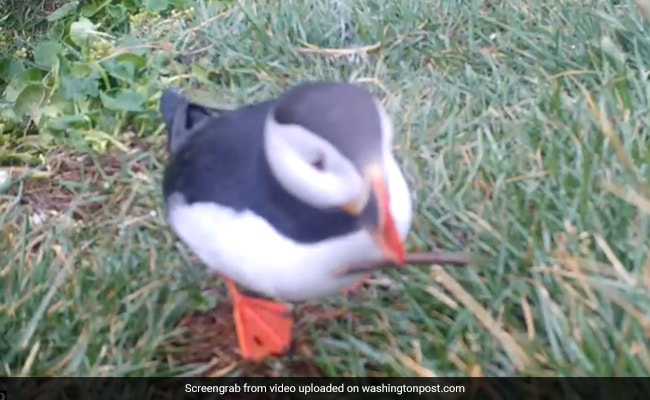 Tool use had never been reported in seabirds before.

Five years ago, on a remote island in Wales, University of Oxford scientist Annette Fayet spied a puffin doing something she had never seen before. The bird, floating on the seawater beneath a cliff, held a stick in its beak.

It began to scratch its back with the stick - the puffin, as Fayet watched, was using a tool.

Fayet, a puffin expert who studies how the birds migrate and feed, wrote about the crafty bird in her notebook. But she had no photo evidence of this first-of-a-kind sighting. "It was just one observation, and I was busy doing something else," she said. As unusual as this was, Fayet said, she "kind of forgot about it."

Until it happened again. In July 2018, Fayet was studying another group of puffins at Grimsey Island in Iceland, about a thousand miles from Wales. She planted camera traps on the island and recorded "loads and loads of puffin behavior."

Another puffin used a scratching stick. This time, the action unfolded in front of a camera: The bird spots a stick and grasps it with a cartoon-bright beak. The bird makes a burbling sound. It turns, as if to face the lens. And then it scratches its chest feathers with the stick's pointy end.

This was not some nesting behavior gone awry. Puffins collect soft grass for their nests, then hurry into their burrows with beaks full of bedding. The puffin in Iceland dropped the stick after it finished scratching. Hours later, the camera recorded the stick, still discarded, on the ground.

This behavior "fits all current definitions" of tool use, said University of Oxford zoologist Alex Kacelnik, who has studied toolmaking crows and was not a member of the puffin research team.

Fayet sent the recording to her colleague Dora Biro, an animal behavior expert at the University of Oxford. The video immediately excited Biro because, as she said, "this was a puffin, this was a seabird - and tool use had never been reported in seabirds before." Together, with their colleague Erpur Snaer Hansen, the biologists described puffin tools in a study published Monday in the Proceedings of the National Academy of Sciences.

Studying animal tools can help scientists understand the origins of our own Stone Age, which began when our ancestors picked up rocks around 2.6 million years ago. But tools wielded by beak, paw or snout are rare. Scientists have observed tool use in fewer than 1 percent of species, which are erratically scattered among animal groups. Chimpanzees and several other primate species use tools. Yet so do sea otters, fish and even some insects, such as ants that sop up honey in spongy matter.

Several bird species use tools. Crows in the Pacific, for instance, use hooked twigs to catch grubs. But back-scratching is an unusual form of tool use that the scientists called "body care." The only other type of body care observed in wild birds, Biro said, is "anting," in which birds cover their bodies in insects. Bug juices, biologists suspect, can act as chemical defenses against bird parasites or fungi.

The puffin in Iceland may have been trying to rid itself of ticks. "At the time, when these observations were made, there was also a particularly high parasite load on the birds that year," Biro said. A scientist who reviewed Biro and Fayet's paper suggested the stick could have had chemical properties, too. (That's hard to say; the twig was dry, and the scientists don't know what sort of plant it was.)

Kacelnik said he was puzzled by the puffins' actions. "The birds were not reaching otherwise unreachable parts of their bodies," he pointed out. After all, why use a stick when a beak could do? He wondered whether the irritants on the puffins could be "toxic or particularly distasteful" - like a smear of boat fuel, perhaps - "hence the birds may have wanted to avoid beak contact." In experiments, New Caledonian crows, the grub-fishing species, will use sticks to touch objects the birds perceive as dangerous, such as rubber spiders, he said.

Or, maybe, the satisfaction of an itch well-scratched is just one of those things that transcends species.