The video, which appears to be recorded on a mobile phone, was posted on Twitter by Mr Sharif's daughter Maryam. She too is accompanying her father back to their country, where both face imprisonment. 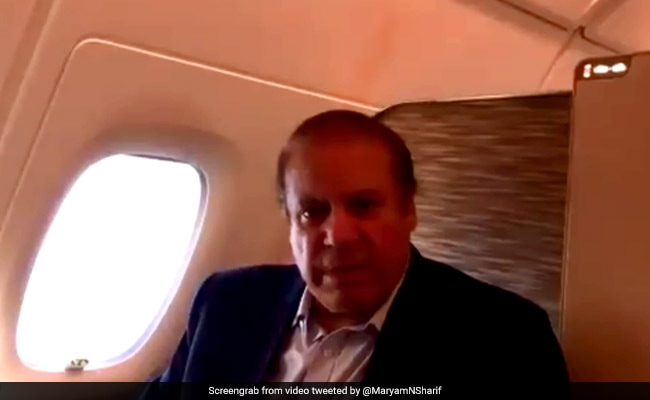 In a last-minute message before his imminent arrest, Nawaz Sharif asked people of Pak to stand by him

Hours before his imminent arrest upon landing in Pakistan, Nawaz Sharif made an appeal to his countrymen, urging them to stand with him and "change the fate of the country".

"Our country is at a critical juncture right now, and I have done whatever I could. I know that I have been sentenced to 10 years in prison and will be taken directly to jail, but I want to say to the people of Pakistan that I am doing this for you and for the generations to follow. I am making this sacrifice for the future of Pakistan," Mr Sharif, the former prime minister of Pakistan said in his appeal.

The video, which appears to be recorded on a mobile phone, was posted on Twitter by Mr Sharif's daughter Maryam. She too is accompanying her father back to their country, where both face imprisonment.

Towards the end of the video, which is little under a minute long, Mr Sharif can be seen appealing to the people, saying, "Come, walk with me. Let us hold hands together and change our destiny, and the fate of Pakistan. Such chances don't come often, this is my message to you all - the people of Pakistan."

In another message to his supporters and partymen before he left London, Mr Sharif had said, "Maryam and I are coming back to face prison, and even if they send me to the gallows, we know that freedom cannot be won without sacrifice. It is not easy to leave my wife on a ventilator in a hospital, but I am returning along with my daughter to play our role to rid of this slavery."

Mr Sharif was sentenced by a court in Islamabad last week over the purchase of high-end properties in London. He was ousted from his third term as prime minister by the Supreme Court of Pakistan last year following a corruption investigation and banned from politics for life but remains a powerful symbol for his ruling party.

Before leaving London for Abu Dhabi, en route to Lahore, Mr Sharif's daughter Maryam shared a photograph posted by a Pakistani journalist showing Nawaz Sharif bidding farewell to his ailing wife Kulsoom Nawaz, before leaving for the airport. An emotional Maryam is also seen in the picture, which was widely circulated on social media in Pakistan.

Kulsoom Nawaz has been on a ventilator, on life support, at a hospital in London. She had even slipped into coma. However, reports suggest that she recently came out of coma and "opened her eyes after a month."