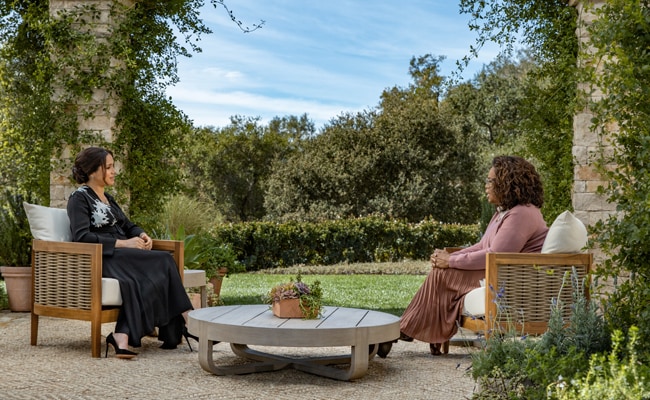 In the days leading up to Oprah Winfrey's highly anticipated prime time interview Sunday night with Harry and Meghan, the Duke and Duchess of Sussex, CBS released a clip that showed Winfrey telling the couple, "You've said some pretty shocking things here."

That may have been an understatement. Here are some of the biggest takeaways from the interview.

Winfrey noted that Meghan had once said "the daily onslaught of vitriol and condemnation from the U.K. press was "almost unsurvivable." (Meghan, who is biracial, in particular faced racist and sexist coverage in the tabloids not long after she and Harry started dating.) When Winfrey asked whether there was a breaking point, Meghan said that at one point after they got married, "I just didn't want to be alive anymore."

"That was a very clear and real and frightening constant thought," she said. Meghan said that she went to several people in the "institution" (apparently meaning the palace and royal family, though she did not give names) and that, "I've never felt this way before, and I need to go somewhere." She also went to royal human resources.

In response, Meghan said, while they were sympathetic, she was told, "There's nothing we can do to protect you, because you're not a paid employee of the institution."

"This was emails and begging for help, saying very specifically, 'I am concerned for my mental welfare,' " Meghan said. While they agreed the attacks she was under were "disproportionately terrible," no action was taken. "So we had to find a solution," she said.

"Did you ever think about going to a hospital?" Winfrey asked. "Or is that possible, that you can check yourself in someplace?"

"That's what I was asking to do. . . . I couldn't, you know, call an Uber to the palace," Meghan said. "You have to understand, as well, when I joined that family, that was the last time . . . that I saw my passport, my driver's license, my keys. All that gets turned over."

Winfrey said it sounded as if "you were trapped and couldn't get help, even though you were on the verge of suicide."

"That's the truth," Meghan said. She added that Harry was very supportive and did not want her to be home alone after she told him.

When Harry joined the interview later, he was "ashamed" to admit to his family that Meghan needed help, then ultimately realized it was an issue that they would not understand.

The royal line of thinking about his and Meghan's struggles with the loneliness and scrutiny of their lives, he said, was: "This is just how it is, this is how it is meant to be, you can't change it. We've all been through it."

Meghan also revealed when she was pregnant with her now nearly 2-year-old son Archie, there were "concerns and conversations" about how dark his skin would be when he was born - and that race may have played a role in why she and Harry were told why he would not be given the title of prince, nor would the baby be given a security detail after he was born.

Winfrey, upon hearing this, was stunned. "That's a conversation with you?" she asked. "About how dark your baby is going to be?" When Meghan did not respond, she followed up: "You're not going to tell me who had the conversation?"

"I think that would be very damaging to them," Meghan said.

Later, Winfrey asked Harry to reveal more details. "That conversation I'm never going to share," he said, and declined to say any more on the topic, or specify who had talked to him about this.

At one point, Winfrey clarified: Did they make their bombshell decision to "step back" as senior royals and leave the United Kingdom for North America because "you were asking for help and couldn't get it?"

"Yeah, basically," Harry said. "But we never left." Meghan agreed and said they envisioned a pause from their "senior roles," and not necessarily giving up everything. (Buckingham Palace recently announced that the pair will lose their royal patronages and honorary military titles.) But it became clear that the royal family was not going to help them, and that they needed to seek it elsewhere. They left the United Kingdom early last year, and ultimately settled in Montecito, Calif., where they have a $15 million estate (and count Winfrey as a neighbor).

Although the U.K. press reported that Queen Elizabeth was "blindsided" by the couple's decision to leave their royal duties, Harry said he was in communication with his family before it released a statement in January 2020. At one point, his father stopped taking his calls.

Now, Harry said, he has talked to Prince Charles, but "there's a lot to work through there." He also expressed disappointment that his family did not speak up to defend Meghan.

"I feel really let down," he said, adding that he hoped his father, who has been through similar painful situations, would support him more than he did. "I will always love him, but there's a lot that's happened."

He reiterated statements he made that he will also always love his brother, Prince William, but that they're on separate paths. He also said he has a "great relationship" with his grandmother Queen Elizabeth, and that they have talked more this year than they ever have before - including some Zoom calls with Archie.

When Winfrey asked whether the couple had regrets, Harry said no, and that he was proud of how he and Meghan handled things - their lives are much better now, compared to when he would come home in London and Meghan would be crying as she breastfed Archie. "So, we did what we had to do, and now we've got another little one on the way," he said. The couple recently confirmed that Meghan is pregnant with her second child, due this summer, and they announced during the special that it's a girl.

Meghan was forthcoming about her regrets. "I have one," she told Winfrey. "My regret is believing them when they said I would be protected."

About six months after Harry and Meghan wed, U.K. tabloid stories cropped up claiming that during a disagreement over Princess Charlotte's bridesmaid dress, Meghan reduced Catherine, Duchess of Cambridge, to tears. On Sunday, not only did Meghan vehemently deny that account, she said it was the opposite: Catherine made her cry.

"I don't say that to be disparaging to anyone, because it was a really hard week of the wedding. And she was upset about something, but she owned it, and she apologized," Meghan said. "And she brought me flowers and a note, apologizing."

Months later, Meghan was shocked to see the story twisted in the tabloids - and although she said there were many witnesses who could have come to her defense or shared the real story, none did. That marked a "turning point," Meghan said, as she realized she would be left to her own devices when there were negative stories in the press - and the general palace guidance was to always say "no comment."