After a few hours, the lion was successfully darted, immobilised and safely transferred to the veterinary facility, officials said. 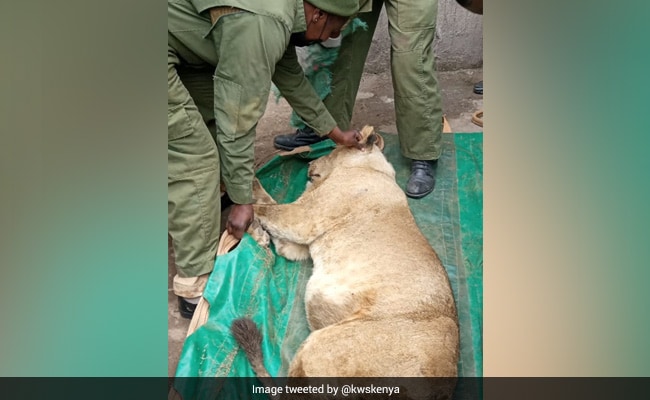 The lion was successfully captured and safely transferred to the veterinary facility, officials said.

A lion caused panic on Wednesday after straying from its habitat in Nairobi National Park into a crowded neighbourhood during morning rush hour south of the Kenyan capital.

The young male cat was spotted by panicked residents in a trench behind a concrete wall and some metal sheeting in Ongata Rongai, a residential area that borders the park.

The lion was successfully darted, immobilized and safely transferred to the veterinary facility for observation & collaring before being released back to the park.#BraveryBeyondExpectationpic.twitter.com/mhUJetFxtu

The Kenyan Wildlife Service (KWS) was called to intervene and dispatched rangers and veterinary staff to the scene, where a large crowd had gathered to peer at the animal.

"The lion was successfully darted, immobilised and safely transferred to the veterinary facility for observation & collaring before being released back to the park," KWS said in a statement.

Some were less than impressed by the unwelcome visitor.

"The panic this lion caused was massive because even children delayed going to school and people to work," said Roselyn Wangare, a university student.

Jackson Mwangi, a resident of Ongata Rongai, said KWS needed to tighten up security at the park.

"At the end of the day it is our safety, the park is not secured well and that is why the animals keep straying," he said.

The park is just seven kilometres (four miles) from the heart of Nairobi, and incidents of animals escaping the grassy plains and wandering into the chaotic metropolis of more than four million are not unheard of.

In December 2019, a lion mauled a man to death just outside the park, while in March 2016 another cat was shot dead after attacking and injuring a nearby resident.

Just a month before that, in February 2016, two lions spent a day wandering through Kibera, a densely packed city slum, before returning to the park, and days later more lions were spotted in town.

The park is ringed by electric fencing in parts but is not entirely sealed off, enabling traditional migration by game in search of grazing.

Endangered wildlife including lions, leopards, rhinos and buffalos graze in the iconic park against a backdrop of distant skyscrapers.

The big cats are under growing pressure as one of Africa's fastest growing cities expands into ancient migration and hunting grounds.

Conservationists say lions lived there before people in the area and are not escaping the park nor straying into human settlements, rather people have moved into the lions' habitat.