A pilot is seen reaching out of the cockpit window in the brief video clip shared by the Dallas-based airline to take a phone from a ramp worker. 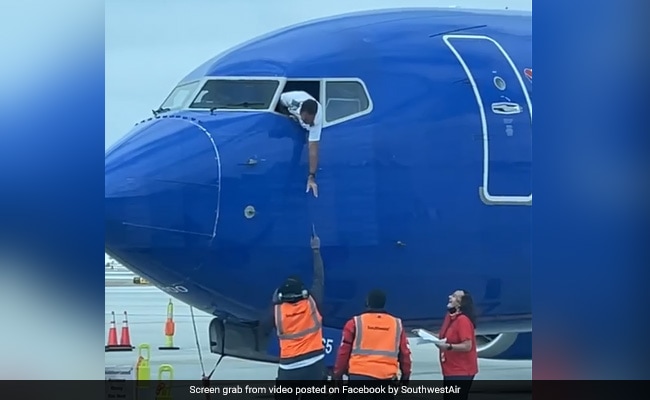 Captain of the flight is seen hanging out of the cockpit window to retrieve the phone.

A video of the Southwest Airlines plane's captain and California airport crew worked together to reunite a passenger with a phone left behind at the gate is going viral on the internet. Social media users are praising the pilot's action of reaching out the window of his aircraft to grab a phone that a passenger had left behind before boarding.

Around the time the flight was set to leave Long Beach Airport, a few ground crew personnel were seen handing the pilot a phone. The plane had finished boarding and was getting ready to take off, according to the airline, when the phone was found at the gate.

The Dallas-based airline posted the video on its Facebook page with a caption that reads, "When our Employees at Long Beach Airport noticed a Customer's phone left behind in a gated area after a flight that was already boarded and pushed back from the gate, they didn't hesitate. They quickly passed the phone to our Ramp Agents, who jumped it up to the Captain to get it back to the Customer."

"And that's why you guys are the best," wrote one user in the comment section.

"Love Long Beach Terminal and Southwest Airlines. And that is called a customer service representative. That's what we need more of! Way to go Southwest and all the staff that made that happen!" another user commented.