On Tuesday, the United States held back $65 million that had been destined for the agency, two weeks after President Donald Trump threatened future payments. 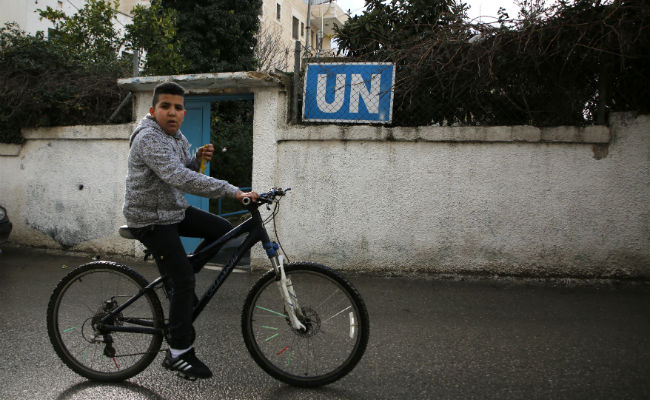 Ramallah, Palestinian Territories: The UN agency for Palestinian refugees warned Wednesday it faced its worst funding crisis ever after the White House froze tens of millions of dollars in contributions, a move Palestinian leaders decried as cruel and blatantly biased.

The agency provides Palestinian refugees and their descendants across the Middle East with services including schools and medical care, but Prime Minister Benjamin Netanyahu has long accused it of hostility toward Israel and called for its closure.

Some five million Palestinians are eligible for its services.

On Tuesday, the United States held back $65 million that had been destined for the agency, two weeks after President Donald Trump threatened future payments.

The United States is the largest contributor to the United Nations Relief and Works Agency for Palestine refugees (UNRWA).

"The US has announced it will contribute $60 million to the programme budget. There is for the moment no other indication of possible funding," UNRWA spokesman Chris Gunness told AFP.

"This dramatically reduced contribution results in the most severe funding crisis in the history of the agency."

He added that "stability in the Middle East is what we are talking about and the potential impact of UNRWA being destabilised is very likely to be widespread, profound, unpredictable and catastrophic."

Senior Palestinian officials reacted with outrage to what they see as another move against them by Trump's White House following his declaration of Jerusalem as Israel's capital.

Hanan Ashrawi, a senior member of the Palestine Liberation Organisation, said the freeze amounted to "cruelty" toward a "vulnerable population".

The Palestinian envoy to Washington, Husam Zomlot, said: "Palestinian refugees and children's access to basic humanitarian services, such as food, health care and education, is not a bargaining chip but a US and international obligation."

Palestinian officials also accused Trump of chipping away at issues long considered up for negotiation as part of a comprehensive resolution to the Israeli-Palestinian conflict, including the status of Jerusalem and the plight of refugees.

Around 500 people protested in the Gaza Strip on Wednesday against the freeze.

"Of course this decision will have negative effects and the reduction of the aid will impact our health, our education," Ibtisam al-Sisi, in her 50s, said at the protest.

France meanwhile said it "regrets" the US move and was in contact with Washington about it.

The funding freeze comes with relations between the Palestinians and Washington already on the brink.

On Sunday, Palestinian president Mahmud Abbas denounced Trump's peace efforts as the "slap of the century," while Palestinian leaders have threatened to suspend their recognition of Israel.

US State Department officials insisted the decision to freeze the funding was taken not to pressure Palestinian leaders but to encourage other countries to help pay for and reform UNRWA.

But the call came after a behind-the-scenes tussle between hawks who want to cut all aid to Palestinians and officials concerned about the humanitarian and diplomatic fallout.

The State Department said $60 million of what had been a planned $125 million package would go through to keep the agency running, but the rest will be withheld for now.

Krahenbuhl said the $60 million would keep schools and hospitals open for now, but noted that it was dramatically less than the $350 million Washington paid during 2017.

The State Department's position raised scepticism in the light of tweets sent by Trump on January 2, at the time when the $125 million contribution had been due to be paid.

"We pay the Palestinians HUNDRED OF MILLIONS OF DOLLARS a year and get no appreciation or respect," Trump said.

"They don't even want to negotiate a long overdue peace treaty with Israel," he protested, adding: "Why should we make any of these massive future payments to them?"

Following Trump's outburst, it was reported that his ambassador to the UN Nikki Haley had been pushing for a complete end to US support for UNRWA.

But the United States is the biggest single source of funding for the agency, and other US officials opposed an immediate and total suspension.

Israel welcomed the freeze as a victory.

Netanyahu said during a trip to India that "this is the first time that UNRWA is being challenged," Israeli media reported.

"For 70 years, this organisation has been perpetuating the situation of Palestinian refugees and the narrative of the abolition of Zionism."

But many analysts, including Israelis, warn closing or crippling the agency without an effective replacement could lead to further poverty and perhaps violence.

Netanyahu said "there is always a certain amount of risk" with such decisions.

UNRWA has provided health care, emergency aid and schooling to Palestinians since 1950.

It was formed in the wake of Israel's creation in 1948 and the war surrounding it, when hundreds of thousands of Palestinians were either forced from their homes or fled.

UN Secretary General Antonio Guterres said he was "very concerned" by reports of the freeze.


(This story has not been edited by NDTV staff and is auto-generated from a syndicated feed.)
Comments
Palestinian refugeesUS aid to palestineUnited Nations