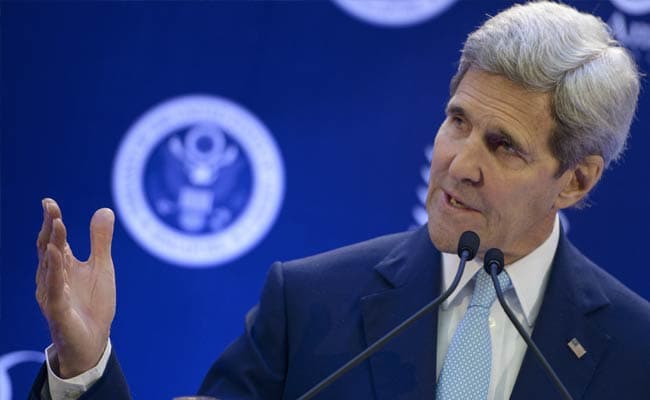 Hanoi: US Secretary of State John Kerry met top communist party leaders in Hanoi today and hailed the former foes' transformation from enemies to key allies in the two decades since ties were established.

Kerry, who is on the last leg of a trip through the Middle East and Asia, met President Truong Tan Sang early Friday at Hanoi's French colonial-era Presidential Palace, shaking hands with the communist official in front of a giant bust of Vietnam's independence hero Ho Chi Minh.

"In 20 years we have travelled a remarkable distance," Kerry said, hailing bilateral cooperation in fields ranging from education to regional security.

"The journey of reconciliation between our countries is really one of the great stories of nations that once were at war being able to find common ground and create a new relationship," he said.

Kerry added the key issue now was for the two countries to "finish that job" by concluding negotiations for the Trans Pacific Partnership, a huge US-led trade deal of which Vietnam is part.

The top US diplomat and one-time presidential hopeful has said his political activism was inspired by his experiences patrolling waterways in the Mekong Delta on Swift Boats during the Vietnam War.

He served with the US Navy from 1966 to 1970 as a naval lieutenant. It was on his return after two tours of duty that he became a fierce campaigner against the war, which ended in 1975.

Labour rights issues -- Vietnam does not allow independent trade unions -- have been a sticking point in the ongoing trade negotiations, which also include Singapore, Malaysia, Japan and other Pacific Rim countries, but not China.

Kerry said this week in Singapore that the TPP, a key economic priority for the US administration, was close to completion after years of painstaking talks.

Vietnam's intolerance of domestic dissent has also limited US efforts to assist the communist country in bolstering its maritime capabilities.

Hanoi is locked in a longstanding territorial dispute with Beijing over disputed island chains in the South China Sea, which is a key global shipping route and a major geo-strategic tension point between China and the US.

Speaking at a regional security forum in Malayisa on Thursday America's top diplomat said his country "will not accept" curbs on "freedom of navigation and overflight" of the sea.

In a sign of warming ties with Hanoi, last year Washington partially lifted a 40-year ban on arms sales to Vietnam.

But the historic easing of the ban in place since the end of the Vietnam War in 1975 "is the limit thus far of our efforts along those lines," a senior US state department official told reporters travelling with Kerry.

"There are no prospects for altering policy absent continued significant progress in relevant tracks, including on human rights," the official said.

Top US officials have recognised some progress on rights, pointing to a decline in the number of political prisoners and a near-total halt of arrests and prosecutions of domestic critics.

But activists say the Vietnamese government has simply switched approaches to harassing and detaining critics without formally charging them.

In 2013, Kerry returned to Vietnam's Mekong Delta, which he navigated as a wartime gunboat skipper, to highlight its vulnerability to climate change in his role as top US diplomat.
Comments
John KerryAshton CarterVietnamUnited StatesChinaSingaporeHanoiTrans Pacific PartnershipDiplomatic RelationsSouth China SeaVietnamese governmentUS-led trade deal