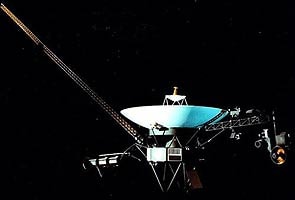 San Francisco: NASA's long-lived Voyager 1 spacecraft, which is heading out of the solar system, has reached a "magnetic highway" leading to interstellar space, scientists said on Monday.

The probe, launched 35 years ago to study the outer planets, is now about 11 billion miles (18 billion km) from Earth. At that distance, it takes radio signals traveling at the speed of light 17 hours to reach Earth. Light moves at 186,000 miles (300,000 km) per second).

Voyager 1 will be the first manmade object to leave the solar system.

"It's like a highway, letting particles in and out," lead Voyager scientist Ed Stone told reporters at an American Geophysical Union conference in San Francisco.

Scientists don't know how long it will take for the probe to cross the so-called "magnetic highway," but they believe it is the last layer of a complex boundary between the region of space under the sun's influence and interstellar space.

"Our best guess is it's likely just a few months to a couple years away," Stone said.

Voyager 1 hit the outer sphere of the solar system, a region called the heliosphere, in 2004 and passed into the heliosheath, where the supersonic stream of particles from the sun - the so-called "solar wind" - slowed down and became turbulent.

That phase of the journey lasted for 5.5 years. Then the solar wind stopped moving and the magnetic field strengthened.

Based on an instrument that measures charged particles, Voyager entered the magnetic highway on July 28, 2012. The region was in flux for about a month and stabilized on August 25.

Each time Voyager re-entered the highway, the magnetic field

strengthened, but its direction remained unchanged. Scientists believe the direction of the magnetic field lines will shift when the probe finally enters interstellar space.

Other clues that Voyager has reached interstellar space could be the detection of low-energy cosmic rays and a dramatic tapering of the number of solar particles, Stone said.

Voyager 1 and a sister spacecraft, Voyager 2, were launched 16 days apart in 1977 for the first flybys of Jupiter, Saturn, Uranus and Neptune.

Voyager 2, traveling on a different path out of the solar system, has experienced similar, though more gradual changes in its environment than Voyager 1. Scientists do not believe Voyager 2, which is about 9 billion miles (14.5 billion km) from Earth, has reached the magnetic highway.
© Thomson Reuters 2012
Comments
Voyager 1