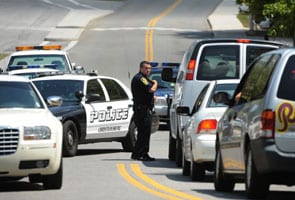 Washington: Virginia Tech was locked down for several hours on Thursday after three children attending a summer camp said they saw a man holding what looked like a gun on the campus where a 2007 massacre left 33 people dead.

The university issued an alert on its website at 9:37 am telling students and employees to stay inside and lock their doors. Text and phone messages were sent to more than 45,000 subscribed to the school's alert system, along with an email sent to the entire campus, said school spokesman Mark Owczarski. The school's outdoor sirens also sounded, he said.

The campus-wide alert was later lifted and students and staff were told to resume their normal activities, according to an email sent at 2:42 pm. The email said there would be a large police presence on campus throughout the day.

Classes were canceled for the day. Police had received no other reports nor found anyone fitting the description the children gave. A composite sketch was posted on the school's website, and officers had scoured the campus for any sign of the possible gunman.

Several thousand students attending summer classes, as well as the school's 6,500 employees, were on campus when the alert was issued, said University spokesman Larry Hincker. Many of the school's 30,000 students are on summer break and will return when the fall semester begins August 22.

Maddie Potter, a 19-year-old rising sophomore from Virginia Beach, said she was working on a class project inside Burchard Hall when a friend received a text message from the school at 9:41 am. Soon after, staff locked the doors and turned off the lights.

Potter, an interior design major, said she was still holed up in a wood shop inside the building on Thursday afternoon. She said things had calmed down since the alert went out.

"I was pretty anxious. We had family friends who were up here when the shooting took place in 2007, so it was kind of surreal," she said. "I had my phone with me and I called both my parents."

The children told police they saw the man quickly walking toward the volleyball courts, carrying what might have been a handgun covered by some type of cloth.

The children who made the report were visiting the campus as part of a summer academic program for middle schoolers in Washington, Richard Tagle, CEO of the group Higher Achievement, said in an emailed statement. All the students who were with the group are safe, he said.

An alert on the school's website said the gunman was reported near Dietrick Hall, a three-story dining facility steps away from the dorm where the first shootings took place in the 2007 rampage.

"We're in a new era. Obviously this campus experienced something pretty terrible four years ago ... regardless of what your intuition and your experience as a public safety officer tells you, you are really forced to issue an alert, and that's where we believe we are right now," Hincker said during a morning news conference.

S Daniel Carter, director of public policy for Security On Campus, a nonprofit organization that monitors how colleges react to emergencies, said it appeared Virginia Tech responded appropriately. Carter's organization had pressed for an investigation into the school's handling of the 2007 shootings.

"You have to take all of the reports seriously because you cannot take the risk that there's something serious going on and you failed to act," Carter said. "The key is the community was informed so they were able to take steps to protect themselves."

Carter said having various forms of notification - sirens and message boards in addition to text messages and e-mails - are important in instances like Thursday's, when many on campus are there for summer camps or otherwise not registered to receive alerts individually.

Virginia Secretary of Public Safety Marla Decker said she was glad the children reported what they saw.
"We'd rather have a report come to us, investigate it and later in the day say there was nothing to it," she said.

Rachel Larson, a 22-year-old English and communications student from Winchester, Va., got a text message alert at her off-campus apartment.

"At first I was a little confused because Virginia Tech - ever since 4/16 - we've been so paranoid. We hear about everything that goes on campus, which is good, but sometimes people freak out when it's a false alarm," she said. "Then I realised my boyfriend was on campus and I started to freak out a little bit."

Larson said her boyfriend was locked down in the student union for several hours but eventually was allowed to leave.

"In the morning everyone was kind of concerned, but as the day went on we kind of realized it's not anything. No one is really that worried anymore," she said.

Last month, Virginia Attorney General Ken Cuccinelli issued a legal opinion that said public university policies generally can prohibit people from openly carrying firearms in campus buildings and at events. However, such a policy would not apply to someone who had a valid concealed carry permit and carried a concealed firearm.

Federal authorities fined the school in March after ruling that administrators violated campus safety law by waiting too long to notify staff and students about a potential threat after two students were shot to death April 16, 2007, in West Ambler Johnston Hall, a dorm near the dining facility.

An email alert went out more than two hours later that day, about the time student Seung-Hui Cho was chaining shut the doors to a classroom building where he killed 30 more students and faculty and himself. It was the deadliest mass shooting in modern US history.

The school's alert system also was activated in 2008, when an exploded cartridge from a nail gun produced sounds similar to gunfire near a campus dormitory. It was the first time the system was activated after the 2007 massacre. After the shootings, Virginia Tech started using text messages and other methods besides emails to warn students of danger.

In 2009, a woman was decapitated while having coffee with a fellow student in a campus cafe. Police said at the time that officers detained the suspect within minutes of being called. The school said it sent some 30,000 notifications by voicemail, email and text message, though they were not sent as emergency alerts because the suspect was already in custody.

Promoted
Listen to the latest songs, only on JioSaavn.com
On Thursday, officials said they were looking for a 6-foot-tall white man with light brown hair. Officials said the person was clean-shaven and wearing a blue and white striped shirt, gray shorts and brown sandals.