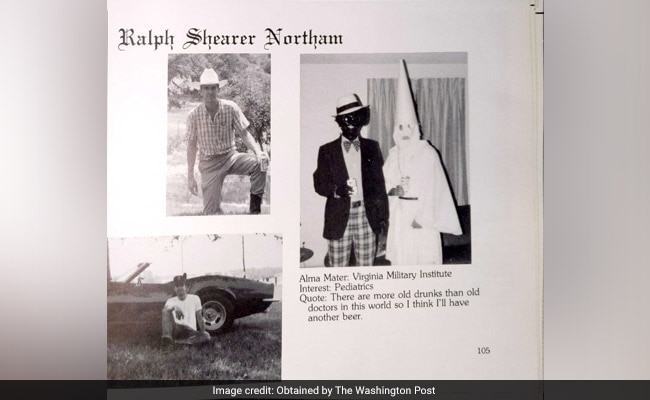 Ralph Northam did not say if he was the man dressed in blackface or Klan robes.

Virginia Gov. Ralph Northam, D, on Friday acknowledged appearing in a "clearly racist and offensive" photograph in his 1984 medical school yearbook that shows a man in blackface and another in a Ku Klux Klan robe.

"I am deeply sorry for the decision I made to appear as I did in this photo and for the hurt that decision caused then and now," he said. "This behavior is not in keeping with who I am today and the values I have fought for throughout my career in the military, in medicine, and in public service. But I want to be clear, I understand how this decision shakes Virginians' faith in that commitment."

Northam, 59, did not say whether he was the man dressed in blackface or the one in a Klan robe and hood.

Calls for his resignation, which began as a trickle, turned into a torrent as the night progressed. Late Friday, even his most trusted allies called for him to step down, including his onetime partner, former governor Terry McAuliffe, D, state Senate and House Democrats, Virginia's legislative Black Caucus and Planned Parenthood. Pressure built, too, from national Democrats, including presidential hopefuls Sen. Elizabeth Warren of Massachusetts, Sen. Kamala Harris of California, Sen. Kirsten Gillibrand of New York, Sen. Cory Booker of New Jersey and Julian Castro, a former mayor of San Antonio.

"Black face in any manner is always racist and never okay," tweeted Derrick Johnson, president of the NAACP. "No matter the party affiliation, we can not stand for such behavior, which is why the @NAACP is calling for the resignation of Virginia Governor @RalphNortham."

The photo reverberated across the country and shook Virginians, who have struggled with a long and difficult legacy around race.

"Virginia's history is unfortunately replete with the scars and unhealed wounds caused by racism, bigotry and discrimination," said Virginia Attorney General Mark Herring, D, who plans to run for governor in 2021. "It is imperative that Governor Northam hears and truly listens to those who are hurt by this image as he considers what comes next."

Members of the state legislature's Black Caucus said earlier that "what has been revealed is disgusting, reprehensible, and offensive. We feel complete betrayal. The legacy of slavery, racism, and Jim Crow has been an albatross around the necks of African-Americans for over 400 years. These pictures rip off the scabs of an excruciatingly painful history and are a piercing reminder of this nation's sins. Those who would excuse the pictures are just as culpable."

The caucus was also grappling with revelations in another yearbook, from Northam's time at Virginia Military Institute. That book listed one of his nicknames as "Coonman," which some members interpreted as a racial slur.

A Northam spokeswoman did not immediately respond to a request for comment on the nickname's meaning.

Hours after his apology, the governor released a video that repeated his contrition but said he intended to serve out the remaining three years of his term.

If Northam were to resign, he would be succeeded by Lt. Gov. Justin Fairfax. Fairfax, a descendant of slaves, would serve the remaining years in Northam's term and then be eligible to run for a full four-year term.

Northam's resignation would be the first in modern Virginia history.

The image in the yearbook from Eastern Virginia Medical School was on a page with other photos of Northam and personal information about the future governor. Northam, a pediatric neurologist, graduated from the medical school in Norfolk in 1984 after earning an undergraduate degree from VMI.

The yearbook page is labeled "Ralph Shearer Northam" and has photos of him in a jacket and tie, casual clothes and alongside his restored Corvette.

Another photo shows two people, one in plaid pants, bow tie and blackface and the other in a Klan robe. Both appear to be holding beer cans. The person in blackface is smiling. Beneath the photo, Northam lists his alma mater and his interest in pediatrics and offers a quote: "There are more old drunks than old doctors in this world so I think I'll have another beer."

Jack Wilson, chairman of the Republican Party of Virginia, said Northam should step down. "Racism has no place in Virginia," Wilson said in a statement. "These pictures are wholly inappropriate. If Governor Northam appeared in blackface or dressed in a KKK robe, he should resign immediately."

Vivian Paige, a longtime political activist in Norfolk who has known Northam since he first ran for office, said she was distraught over the news and felt Northam should step down.

"I'm disappointed and I believe that he can't lead the party anymore," said Paige, who is African-American. "Ralph and I are a year apart in age. It really cuts to the bone to me that someone would do that at our age. Our generation - the tail end of the baby boom - we grew up in an integrated society. How could you not know that was wrong?"

Several Democratic members of Virginia's congressional delegation also called for Northam to resign, including Reps. Abigail Spanberger, Elaine Luria and Donald McEachin, who is African-American and served with Northam in the state Senate.

The yearbook image was first posted Friday by the website Big League Politics, a conservative outlet founded by Patrick Howley, a former writer for the Daily Caller and Breitbart.

The Washington Post independently confirmed the authenticity of the yearbook by viewing it in the medical school library in Norfolk.

The revelation comes after a wild week for Northam, who was accused by Republicans of advocating infanticide after he made comments defending a bill that would have lifted restrictions on late-term abortions. It was more surprising because Northam has billed himself as the political antidote to Donald Trump - an aw-shucks leader with a boring speaking style and a reputation for honesty. He gained the trust of Republicans, who worked with him last year to pass Medicaid expansion in the state after four years of resisting it under the previous governor, McAuliffe.

In his statement, Northam said that he recognized "that it will take time and serious effort to heal the damage this conduct has caused. I am ready to do that important work. The first step is to offer my sincerest apology and to state my absolute commitment to living up to the expectations Virginians set for me when they elected me to be their Governor."

"His whole life has been about exactly the opposite, and that's what you need to examine, not something that occurred 30 years ago," Saslaw said. "While it's in very poor taste, I would think no one in the General Assembly would like their college conduct examined. I would hate to have to go back and examine my two years in the Army. Trust me. I was 18 years old and I was a handful, OK? His life since then has been anything but. It's been a life of helping people, and many times for free."

Saslaw later said he agreed with the legislative Black Caucus.

Sen. Richard Stuart, R-King George, one of the governor's closest friends, said he had not been able to talk to Northam about the yearbook and did not know what to make of it, but stood by him.

"He's my friend and I will always stand up for him," said Stuart, who also took exception to claims that Northam had advocated infanticide.

Joan Naidorf, whose husband's yearbook page is opposite Northam's in the yearbook, said she was surprised the photos are only now coming out, given Northam's stature in Virginia politics.

"We've often wondered over the last 10 years or so why someone didn't dig this up sooner," said Naidorf, a nonpracticing emergency room physician who lives in Alexandria.

She said that when she first saw the photo, shortly after the yearbook was published, "I thought: 'That's awful.' I assumed it was something at a drunken frat party."

She said she didn't know when or where the photos were taken. Her husband, Tobin, wasn't available Friday. He met Northam a few times when they worked medical rotations together but weren't friends, Joan Naidorf said.

Eastern Virginia Medical School allowed students to pick their own photos for their yearbook page, Naidorf said. Her husband chose their engagement photo and other personal pictures. Another student chose a picture of men in blackface and dressed as women in what appears to be a variety-show routine.

Northam has built his 12-year political career on a clean-cut image as a soft-spoken doctor and Army veteran who headed the Honor Council at VMI, a demanding job in which he passed judgment on fellow students accused of lying or violating the school's honor code.

First elected to the state Senate from Norfolk in 2007, Northam has had a charmed political career. He was courted by Republicans because of his conservative leanings, and was identified early by Kaine, who was then governor, as gubernatorial material because of his experience in both health care and the military. Northam served in the Army for eight years after medical school and treated soldiers wounded in the Persian Gulf War.

After serving as McAuliffe's lieutenant governor, Northam ran for governor in 2017. During the campaign, he paid special attention to black churches, often attending two or three on Sundays. His home pastor is African-American. After the racial violence in Charlottesville that summer, Northam was among the quickest Virginia political figures to react, making an emotional plea that all Confederate monuments should come down.

He later walked that back and now says it should be up to localities, but he said recently that his personal belief is that such statues are harmful.

Northam grew up on the Eastern Shore of Virginia in the fishing village of Onancock. His father was a judge and his mother a schoolteacher. Northam and his brother attended a desegregated public high school, where Northam played basketball and baseball.

The origins of blackface date to minstrel shows in the 19th century, when white actors covered themselves in black greasepaint to portray African-Americans in a cartoonish, dehumanizing way. The minstrel shows put forth racist notions of African Americans as primitive, childish and inferior.

Last week, Michael Ertel, Florida's secretary of state, resigned after the emergence of photos from 2005 of him in blackface, apparently mimicking victims of Hurricane Katrina.