The website, which did not appear to have rights to broadcast the drama, asks users to answer questions confirming their Vietnamese identity before the website loads. 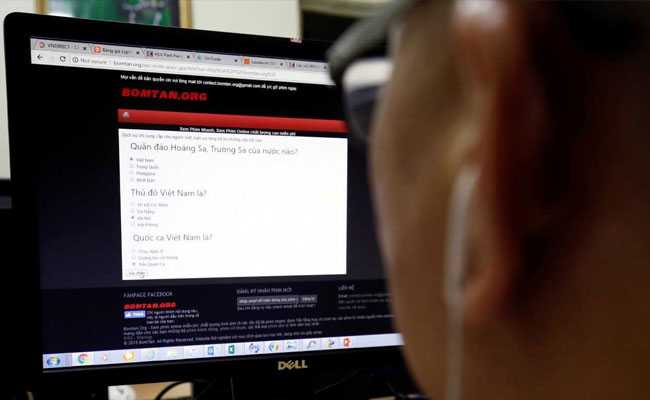 A quiz question about the South China Sea is seen on a Vietnamese website in Hanoi. (Reuters)

A Vietnamese website, which only works when users correctly answer a quiz about disputed islands in the South China Sea, has infuriated scores of television fans in China desperate to catch the latest episode of a popular Chinese period drama.

The drama -- "The Story of Yanxi Palace" -- has attracted a huge following in China for its colourful depiction of Qing Dynasty-era politics and the tale of a brave and plucky young concubine who outsmarts her rivals.

The first 56 episodes of the show are being aired for free on Chinese video streaming platform iQiyi, which holds exclusive rights to the drama. For a fee, iQiyi members can watch eight more episodes.

But a Vietnamese website somehow obtained extra episodes which have not yet been broadcast in China.

Chinese drama fans flocked to bomtan.org, which hosts online copies of Asian television dramas, only to be met with a challenge which pits patriotism against the insatiable urge to binge watch television.

The website, which did not appear to have rights to broadcast the drama, asks users to answer questions confirming their Vietnamese identity before the website loads.

"This service is for Vietnamese people only. Please answer the following questions: To which country do the Hoang Sa (Paracel Islands) belong? Vietnam, China, Philippines or Japan?".

The only correct answer to the question, according to the website, is Vietnam.

The Southeast Asian country has long been embroiled in maritime disputes with China in the South China Sea, or "East Sea", as it is known locally, and claims sovereignty over the Paracels, which the Chinese military currently occupies.

"This is nonsense!," said one Chinese drama fan, commenting on the Weibo microblogging platform. "Who gave Vietnam the courage to challenge China's territorial sovereignty?"

The show's official Weibo account released a statement on Aug. 20 asking other online streaming services to respect copyright, and to remove unauthorised copies of the drama from their websites.

A request for comment sent to a contact email listed on the Vietnamese bomtan.org website went unanswered on Friday. Copies of the drama had been removed from the platform.

The quiz, however, remained.

(Except for the headline, this story has not been edited by NDTV staff and is published from a syndicated feed.)
Comments
South China SeaVietnamChina