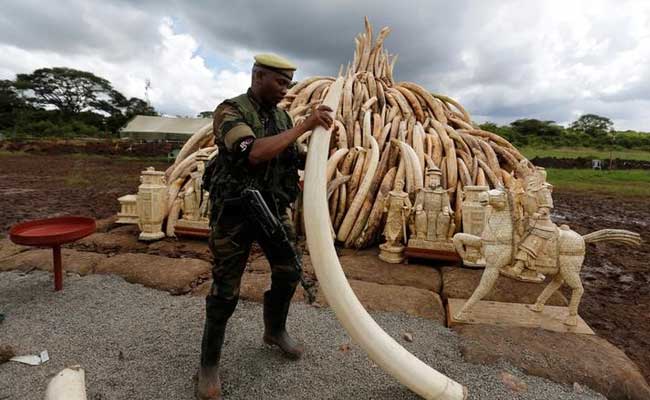 Hanoi, Vietnam: Vietnamese authorities have seized 619 kilograms (1,362 pounds) of ivory illegally shipped in from Africa after finding 4 tons at the same port over the past two months, state media and an official said Friday.

Le Dinh Loi, the city's deputy customs chief confirmed the report, but did not give more details Friday.

The Customs newspaper said the smugglers used more sophisticated tactics than previous shipments by packing wax around the ivory when it is sealed inside emptied-out timber, and then using wood nails instead of metal ones to trick any X-ray checks.

The seizure came just a week after leaders and senior officials from more than 40 countries met at an international conference on illegal wildlife trade in Hanoi, which was attended by Britain's Prince William.

At the conference, Prince William, who is president of United for Wildlife, praised Vietnam, China and other Asian countries for taking steps to battle wildlife trafficking, but said rhinos, elephants, pangolins and tigers are still being killed in horrifying numbers.

He said the international community is not moving fast enough to keep up with the crisis.

Vietnam is one of the world's major transit points and consumers of ivory and rhino horn.

Promoted
Listen to the latest songs, only on JioSaavn.com
Elephant ivory is used as jewelry and home decorations in Vietnam, which bans hunting of its own dwindling population of elephants.