The two surfers were arrested and fined $1,530 each. They were also expelled from the city and their surfboards confiscated. 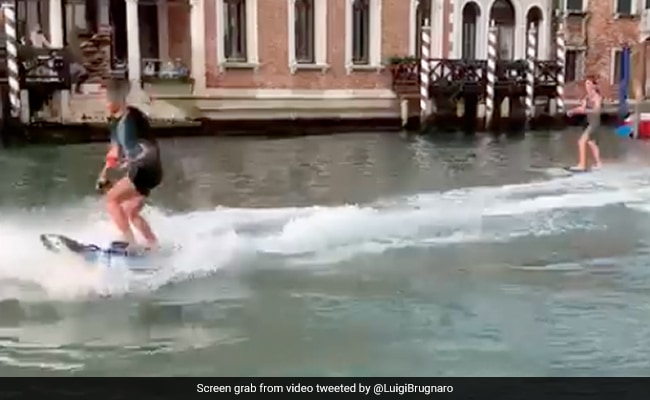 The videos were filmed by shocked onlookers.

Two surfers have been filmed speeding down Venice's Grand Canal on motorised surfboards, invoking the wrath of the city's mayor. Videos of the two surfers have appeared on social media and sparked outrage among users, who have called for a strict fine. They were later arrested by the police, the BBC reported, quoting local media. The two surfers dodged gondolas and waterbuses as they navigated Venice's main thoroughfare, according to the videos circulating online. They have been shot by shocked onlookers.

One of the videos of the notorious surfers was posted by Venice's mayor Luigi Brugnaro on Twitter, promising to buy dinner for anyone who identified them. The clip showed the surfers zipping past water buses and taxis.

One of the surfers appears to be taking picture of the surroundings on a mobile phone before falling into the water.

According to The Guardian, the mayor called the surfers "two overbearing idiots" in his tweet in Italian. He further said that the two men made a mockery of the city.

"I ask everyone to help us identify and punish them, even if our weapons are really blunt - mayors urgently need more powers in terms of public safety," the mayor tweeted, according to the outlet.

The surfers were later arrested and fined $1,530 each and expelled from the city, the New York Post reported. Their electric propeller boards were confiscated, the outlet said in its report, adding that they are facing legal action for damaging the city's image.

The video also appeared on Instagram, on the handle of Venezia Non Disneyland (Venice Isn't Disneyland), a group sensitising visitors about the city.

Some Instagram users slammed the surfers' transgressions with comments like "shameful" and "they need to be expelled from Venice for life".

Some users, however, found their transportation cool. "I want one too!" commented one user.