Iran missile attacks in Iraq: Some people are heard shouting as they trace the missiles just before the impact 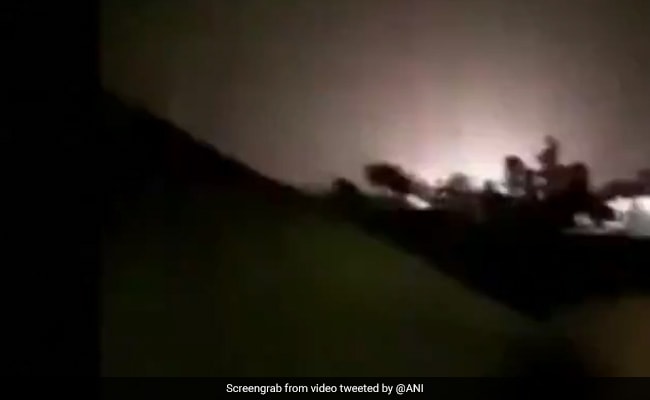 Iran missile attack: A video grab of missiles hitting targets in Iraq where US forces are stationed

Videos on social media are showing Iranian ballistic missiles hitting two airbases in Iraq used by American and coalition troops. In one such video shot in a mobile phone, a streak of light is seen coming down fast against the night sky. It then hits the ground in a ball of fire.

Some people are heard shouting as they trace the missiles just before the impact. They run for cover as the sound of the impact comes from a distance. The sky is lit up briefly.

Officials in Washington and Tehran said it was the first act of the Islamic republic's promised revenge for the US killing of a top Iranian general. The Pentagon said it was still "working on initial battle damage assessments" after "Iran launched more than a dozen ballistic missiles against US military and coalition forces in Iraq."

"It is clear that these missiles were launched from Iran and targeted at least two Iraqi military bases hosting US military and coalition personnel at Al-Assad and Irbil," the Pentagon said.

#WATCH: Iran launched over a dozen ballistic missiles at 5:30 p.m. (EST) on January 7 and targeted at least two Iraqi military bases hosting US military and coalition personnel at Al-Assad and Irbil, in Iraq. pic.twitter.com/xQkf9lG6AP

There were no immediate reports on casualties but the Pentagon said it had been ready, after days of steadily mounting tension and exchanges of threats of war.

Iranian state television reported the attack on at least one base housing US personnel, saying it was in response to Friday's killing in a US drone strike of Iranian general Qasem Soleimani, one of the most important figures in the country's government.

"As we evaluate the situation & our response, we will take all necessary measures to protect & defend U.S. personnel, partners, & allies in the region... These bases have been on high alert due to indications that the Iranian regime planned to attack our forces & interests in the region," Pentagon press secretary Alyssa Farah tweeted.