The video shows the policeman picking up the man as they both stood next to a police vehicle and hurling him to the street, the man's head apparently hitting the curb. 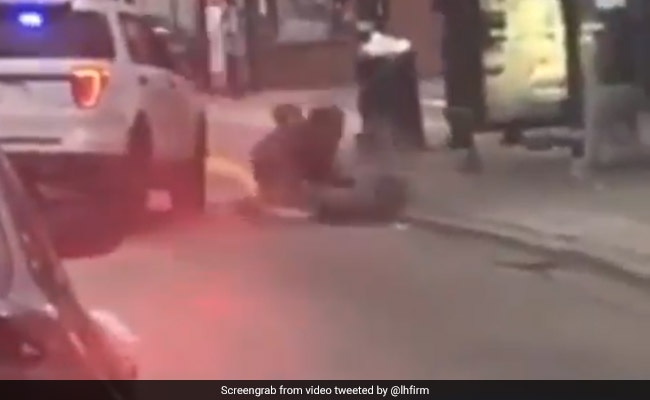 Video shows the man lay motionless as a bystander filmed the incident.

A video of a Chicago policeman slamming a man into the pavement has added new tensions to the city's strained police-public relations, with the mayor on Friday calling it "very disturbing."

Police said the incident took place Thursday in the Chatham neighborhood in Chicago's Southeast Side, when a man, who had allegedly been drinking in public, spat on a police officer as he was being detained.

The video shows the policeman picking up the man as they both stood next to a police vehicle and hurling him to the street, the man's head apparently hitting the curb.

November 28, 2019. Viral cell phone video of a Chicago police officer slamming a man to the ground on 7900 South Cottage Grove.

The man lay motionless as a bystander filmed the incident.

Mayor Lori Lightfoot said on Twitter that she had viewed the video.

"While a single video does not depict the entirety of the interactions between the police and the individual, this particular video is very disturbing," she said.

The incident was being investigated by the Civilian Office of Police Accountability, an independent unit created in 2016 to address public complaints, she added.

"It is my expectation that the investigation will be comprehensive and expedited so that the public may gain a complete picture of what happened," said Lightfoot.

"This incident is under investigation as the actions in the video are concerning," Chicago Police spokesman Anthony Guglielmi said.

According to Chicago media reports, the unidentified man was taken to a local hospital. There was no immediate information on his condition.

Jovonna Jamison, the woman who took the video, told the Chicago Tribune she was "scared" when the incident happened.

"I was hoping this young man was okay," she said.

"I'm not really surprised because it happens so much in Chicago, but I didn't think I would ever see it front and center," she said.