On Camera, Car Skids And Overturns During Police Chase

A shocked man, the owner of the video, is seen rushing toward the car to help the occupants but stops as police cars arrive at the scene. 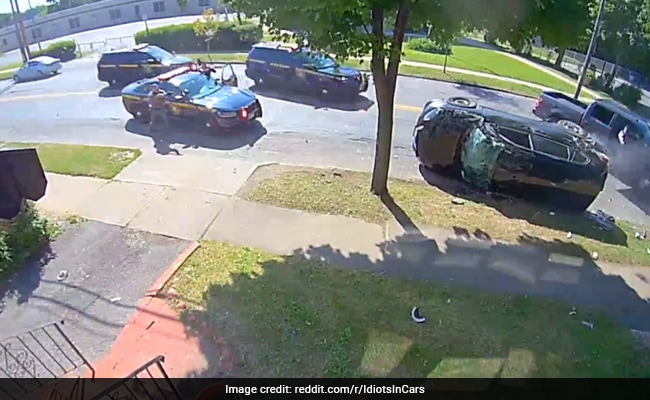 The black sedan swerved and crashed during a police chase.

A high-speed police pursuit ended in a crash, in which the suspect's car flipped and landed on its roof. The accident took place in a residential area and the video was captured by a CCTV camera installed in one of the houses.

The owner of the house has posted the video on Reddit where it has gone viral, receiving more than 67,000 votes. The time stamp on the video shows the incident took place on Wednesday.

As the 36-second video begins, a black car is seen at the corner of the camera's frame speeding towards the neighbourhood. The driver loses control for a moment and that's when the car overturns while trying to avoid a head-on collision with an incoming vehicle.

The black sedan then flips and drags along the road before coming to a stop right in front of the house where the camera was installed.

A shocked man, the owner of the video, is seen rushing toward the car to help the occupants but stops as police cars arrive at the scene.

The occupants of the crashed car come out of the vehicle by pushing out the shattered windshield and start running away. But the cops immediately catch one of them and pursue the other suspect, as seen in the video.

Other police vehicles too arrive at the scene to help catch the escaped man. One of the cops is seen dragging a police dog to track the suspect.

The video shocked Reddit users who posted a barrage of comments.

"There is so much going on in this video between the guy who went from oh shit - to oh SHIT, the guys breaking out the front windshield, and the cop carrying his dog like a toddler refusing to walk," said a user.

"I watched it five times in a row to catch all the details!!" said another.

The man who posted the video also explained his side of the story. "For those asking I had just got home from work. I heard the beginning of the crash as i was unlocking my door and ran to help. The cops rushed out with their glocks out so i peaced out! As far as i know the cops found a hand gun and a a rifle maybe some more guns in the trunk," he said.

The location where the video has been shot is not known.