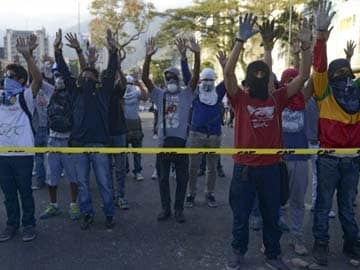 Demonstrators raise their hands as they protest against the government of Venezuelan President Nicolas Maduro, in Caracas on February 24, 2014.

Caracas: Venezuelans erected barricades in major cities on Monday in some of the worst demonstrations against the government since the protests began almost three weeks ago, with the death toll now 14.

Flames raged as tires were burned in cities from the Andes to the plains to Caracas near the Caribbean, adding to the pressure on President Nicolas Maduro's administration, which, though facing its strongest challenge, has not yet had its socialist rule seriously threatened by the recent discontent.

In San Cristobal, near the Colombian border, where some of the country's recent protests first erupted among students on February 4, riot police used tear gas to break up a demonstration.

Repeating the pattern of some of the deaths that have occurred during the recent mass rallies, a student who was on a rooftop terrace fell backwards to his death on the street as police were breaking up the crowd.

But with 45 people still under arrest after marches largely inspired by the oil-rich country's dire shortages of basic goods and longstanding problems with inflation, the potential for escalation remained visible.

In a rare public split within Maduro's ranks, a ruling party governor called for the release of all jailed protesters, an intervention that came ahead of a meeting of his counterparts, called by the president.

Jose Gregorio Vielma Mora, the governor of the western state of Tachira where the student-led protests began, also criticized the government's use of the military, calling the response "a grave error" and "unacceptable excess."

Police on Monday, however, dismantled most of the barricades without trouble.

Maduro insists the protests are a US-inspired coup d'etat to assail his democratic rule, less than a year since he was narrowly elected successor to the late leftist icon Hugo Chavez, whose policies he has continued.

The students, however, have been a vanguard for public outrage at what they see as grim prospects for Venezuelans that they attribute to economic mismanagement under Maduro and Chavez.

Around 50,000 people turned out on Saturday for a massive demonstration called by Henrique Capriles, who lost to Maduro in the 2013 election while disputing the vote, but who has remained in the background of the latest protests.

Capriles said he would not attend the governors' meeting Monday. He also called for the meeting to be broadcast on live television "so that the public can see and hear the truth."

The discontent over economic hardship has spilled over from daily rallies into violence in nightly clashes between protesters, security forces and swarms of motorcycle riding civilians alleged to be acting on behalf of the government.

Maduro has called for "a national peace conference" to be held Wednesday "with all social, political, union and religious groups."

The leftist leader also said he would ask the National Assembly to form a Truth Commission to look into the protests, which he claims are an attempt to "justify foreign intervention in Venezuela."

Venezuelan politics analyst John Magdaleno said the proposed talks are an attempt to improve the government's image as it seeks to ride out the protests.

"The government has seen how high the price is, in terms of public opinion at home and abroad, for his security forces' actions," Magdaleno told AFP.

"With these crisis talks, he is looking for some kind of appeasement," he said, adding that he was skeptical the talks would succeed - or that street protests could lead to the president's resignation.

Although it is under duress, Maduro's "Chavista" administration, which sits atop the world's largest proven oil reserves, can still count on core support among the country's working class.

Earlier Monday, meanwhile, Maduro told reporters in a radio and television address that a "mercenary from the Middle East" had been arrested in Aragua state for allegedly plotting to set off car bombs.

Maduro did not give the man's nationality.

Promoted
Listen to the latest songs, only on JioSaavn.com
Aragua state governor Tareck El Aissami later tweeted that the suspect, identified as Jayssam Mokded Mokded, was detained in Maracay with an armed car, and with US and Colombian communications equipment.

US media identified Mokded as a resident of the US state of Florida; they did not give his nationality but his business is in a town with a large Venezuelan community.