Scientists nationwide are calling out the dangers of loosening state measures like mask mandates and capacity restrictions. 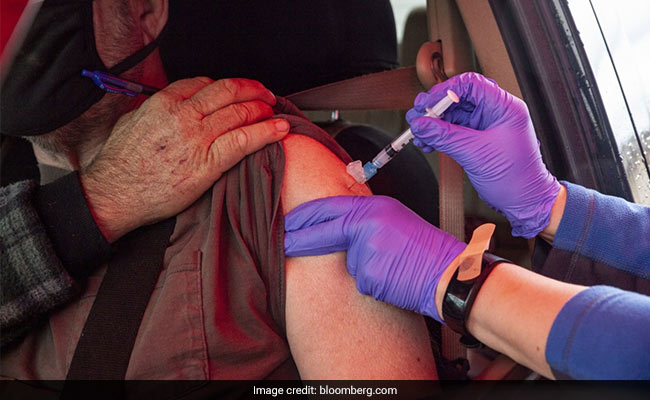 "The war against Covid-19 is far from won," President Joe Biden said Monday at the White House.

The U.S. could soon go the way of Europe, with a burgeoning resurgence of the coronavirus, as states loosen restrictions and more contagious variants become increasingly prominent, the nation's top public health official warned.

U.S. Centers for Disease Control and Prevention Director Rochelle Walensky said she had a feeling of "impending doom" amid a new wave of infections even as the number of Americans vaccinated continues to rise. Scientists nationwide are calling out the dangers of loosening state measures like mask mandates and capacity restrictions.

"It's just irresponsible to do the kinds of things you're seeing many governors doing," as variants spread with millions still unvaccinated, said Ashish Jha, dean of the school of public health at Brown University.

While the U.S. races to vaccinate its population -- almost 29% have received at least one dose -- the virus could still push ahead, experts said. Each time it infects a new person, the possibility increases of additional mutants that could spread faster or evade vaccines.

"The war against Covid-19 is far from won," President Joe Biden said Monday at the White House, urging states to maintain mask and social distancing guidelines to ward off a resurgence.

"Absolutely the signs suggest we should be concerned right now," said Ellie Murray, an assistant professor of epidemiology at Boston University. Though many of the most vulnerable people have gotten vaccinated, "everyone is vulnerable. We really need to get those vaccines rolled out before we expect to get things under control."

The latest turn in the U.S. pandemic trajectory follows a fall and winter surge. Cases steadily decreased from early January through mid-February, before stalling, falling again, stalling again and then starting to rise.

Now the country's vaccine push is tilting into high gear, with states widening eligibility criteria and supply opening up. New York expanded its guidelines, and Biden said that 90% of U.S. adults will be eligible for vaccination by April 19.

Even so, eligibility does not equal vaccinations: Only about 16% of the U.S. population, or 52.6 million people, is fully immunized. The campaign has prioritized those at highest risk and had particular success among older individuals. Almost three of four people ages 65 and older have received at least one shot, and nearly 50% have been fully vaccinated.

It's likely that this strategy will dampen rates of severe disease and deaths in the case of another surge. Yet younger people can still fall ill with Covid-19 and contract severe cases. Virus-related hospitalizations are now climbing in 25 states, often among patients younger than 65 years old. Vaccinating them could be key to saving lives.

"Anybody who gets sick and dies today is somebody who would be vaccinated a month from now, or sooner," Brown's Jha said.

Jha said he expects there will be a fourth wave of infections in the U.S but that the harshest effects will be mitigated by vaccination of vulnerable people. While "you'll still see people die," he said, "we're not going back to the horrible numbers of December, January."

Walensky has been a cautious voice at the CDC, telling Americans for weeks that there could still be a resurgence of the virus, but Monday was her strongest statement to date.

"I'm going to reflect on the recurring feeling I have of impending doom," Walensky said at a press briefing, her voice strained. "We have so much to look forward to, so much promise and potential of where we are and so much reason for hope, but right now I'm scared."

Public-health experts and modelers have indicated in recent weeks that the U.S. virus trajectory is trending in a troubling direction.

The University of Washington's Institute for Health Metrics and Evaluation in Seattle, which produces Covid-19 projections, revised its "worse" scenario recently, predicting that U.S. deaths will rise to 657,000 by July 1 -- 57,000 more than in its base-case scenario. The projection is based on faster reductions in mask-wearing, increases in mobility and spread of variants of concern, according to IHME. 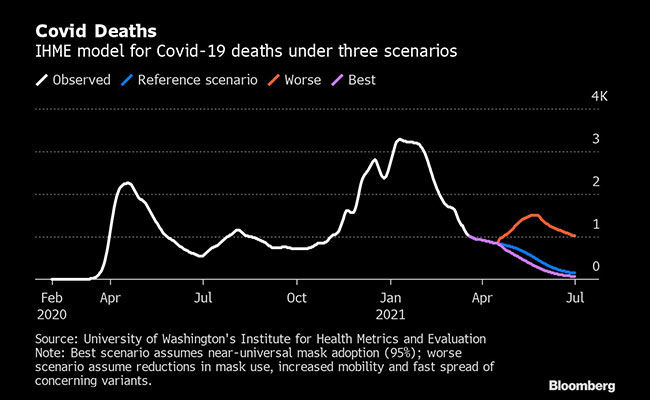 B.1.1.7, a contagious strain that first surfaced in the U.K., now makes up about 26% of all sequenced viruses, Walensky said Monday. The CDC has previously projected it could become the dominant coronavirus strain in the U.S. by March. It is "probably less forgiving and more infections will occur," Walensky said on Monday.

How big a role variants played in the latest trends isn't clear because states were loosening restrictions as the new strains raised alarm bells, Boston University's Murray said. U.S. genomic surveillance efforts that can help identify variants and their spread have also lagged behind some other nations and are still ramping up.

Walensky on Monday also criticized states' relaxation of restrictions, and said she was working to persuade governors to slow the pace of reopening. Officials have also observed an increase in travel, and people are tired of the pandemic, she said.

In New Jersey, the number of people hospitalized for the virus increased to 2,225, the highest since Feb. 17. Governor Phil Murphy on Monday increased outdoor gathering limits, in hopes of encouraging residents to be social outside. He said fatigue, the variants and still-cool temperatures are driving higher cases, as is the state's density.

Walensky on Monday compared U.S. Covid trends to those a few weeks ago in the European Union, which has since seen spikes occur.

Daily case totals have surged to the highest levels since November in France, where doctors have warned that shortages of ICU beds loom. Italy, Germany and other countries are also seeing increases. So far deaths are well below levels from previous waves of the pandemic, however.

In the U.K., meanwhile, both cases and deaths have plunged to the lowest levels since September. The country has been Europe's leader in vaccination, with shots given to more than half of the adult population. Britain eased some lockdown measures on Monday, with further steps planned in the coming months.