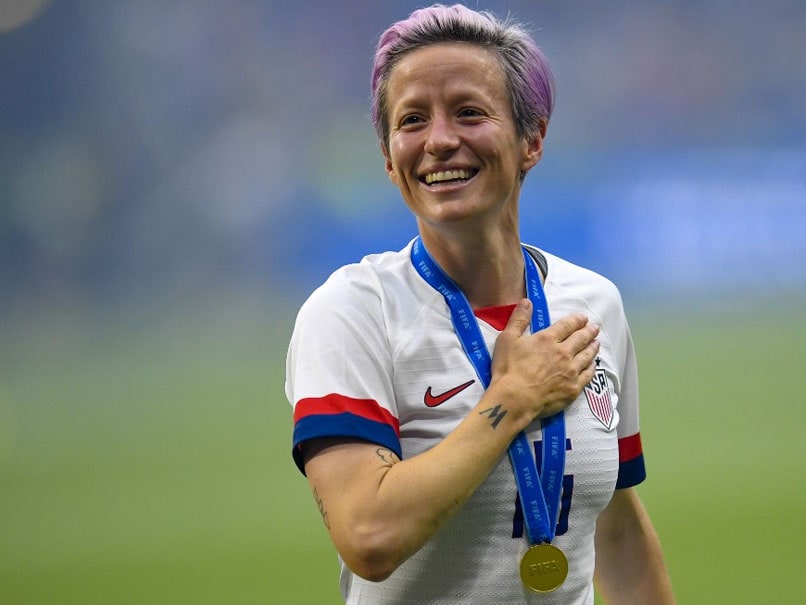 "It's been an incredible year," said Megan Rapinoe in a recorded video message

Rapinoe, 34, succeeds Norway's Ada Hegerberg, the inaugural winner of the women's prize last year, after starring on and off the field as the US retained the World Cup in France in July.

"It's been an incredible year," said Rapinoe in a recorded video message having been unable to return to France to collect her award due to playing commitments.

"I want to say a huge thank you to my team-mates, the coaches, the US Soccer Federation, for all of the support to allow me to be who I am and do what I do on the field but also be the person who I am off the field."

Rapinoe, who plays club football for Reign FC in the US, added: "I'm so sorry I can't be there. I was looking forward to mixing it up with everyone but I'll do my best to get back there next year."

Rapinoe was one of four members of the US side that lifted the World Cup to be nominated for the prize, along with Tobin Heath, Rose Lavelle and Alex Morgan.

The latter finished in third place for the award organised by magazine France Football and voted for by a panel of 48 journalists.

England's Lucy Bronze, who won the Champions League with Lyon before reaching the World Cup semi-finals with her country, losing to the US, came in second.

Rapinoe, meanwhile, was the star of that tournament on and off the field.

She won the Golden Boot for top scorer, with six goals, and Golden Ball for best player at the World Cup. Rapinoe scored the opening goal from the penalty spot as the US beat the Netherlands 2-0 in the final to retain their trophy.

But the feminist icon also made headlines with her outspoken criticism of US President Donald Trump during the tournament and by leading the calls for her team to be paid the same as their male counterparts.

(Except for the headline, this story has not been edited by NDTV staff and is published from a syndicated feed.)
Comments
Megan RapinoeBallon d'Or