US warns Vladimir Putin against Ukraine grab amid break-up fears 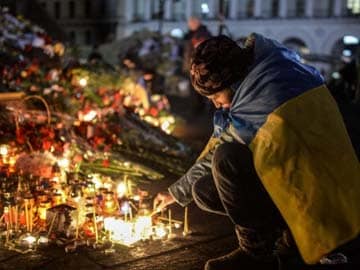 A woman lights a candle at a makeshift memorial to anti-government protesters killed in the past weeks' clashes with riot police on Kiev's Independence Square early on February 24, 2014

Kiev: The United States and European allies warned Russia not to send forces into Ukraine on Sunday as rival neighbours east and west of the former Soviet republic said a power vacuum in Kiev must not let the country break apart.

A day after Moscow-backed president Viktor Yanukovich fled to the Russian-speaking east following dozens of deaths on the streets, parliament named its new speaker as interim head of state. An ally of the ousted leader's long jailed rival Yulia Tymoshenko, he aims to swear in a government by Tuesday that can provide authority until a presidential election on May 25.

With battle-hardened, pro-Western protesters in control of central Kiev and determined to hold their leaders to account, lawmakers rushed through decisions to cement their power, display their rejection of rampant corruption and bring to book officials who ordered police to fire on Independence Square.

But whoever takes charge as interim prime minister faces a huge challenge to satisfy popular expectations and will find an economy in deep crisis, even if the EU makes good on new offers of aid that may help make up for loans that Russia has frozen.

Scuffles in Russian-speaking Crimea and some eastern cities between supporters of the new, pro-EU order in Kiev and those anxious to stay close to Moscow revived fears of separatism that a week earlier were focused on the west, where Ukrainian nationalists had disowned Yanukovich and proclaimed self-rule.

"That would be a grave mistake," Rice said. "It's not in the interests of Ukraine or of Russia or of Europe or the United States to see a country split. It's in nobody's interest to see violence return and the situation escalate."

Yanukovich's flight into hiding left Putin's Ukraine policy in tatters, on a day he had hoped eyes would be on the grand finale to the Sochi Olympics. The Kremlin leader spoke on Sunday with German Chancellor Angela Merkel, whose foreign minister had brokered a short-lived truce in Kiev on Friday.

They agreed Ukraine's "territorial integrity" must be maintained, Merkel's spokesman said in a statement.

British Foreign Secretary William Hague was asked if Russia might "send in the tanks" to defend its interests among ethnic Russians in the east and on the Crimea peninsula, where Moscow bases its Black Sea Fleet: "It would really not be in the interests of Russia to do any such thing," he told the BBC.

Earlier this month, a Kremlin aide warned that Moscow could intervene and accused Washington of breaching their 1994 treaty under which Russia removed Soviet nuclear weapons from Ukraine.

It is unlikely the United States and its allies in NATO would risk an outright military confrontation with Russia but such rhetoric, laden with echoes of the Cold War, underlines the high stakes in Ukraine, whose 46 million people and sprawling territory are caught in a geopolitical tug of war.

EU officials offered financial aid to a new government and to revive a trade deal that Yanukovich spurned under Russian pressure in November, sparking the protests that drove him from office after 82 deaths last week, many from police sniper fire.

The United States has also promised help. But budgets are tight in the EU and Washington, and international creditors like the IMF may remain wary of Yanukovich's opponents, whose years in government before him were no economic success story.

However, concern about instability and a popular desire to be seen backing what looks to Western voters like a democratic movement threatened by Russian diktat may loosen purse strings - at least to tide Ukraine over until after the elections.

In Russia, where Putin hoped to count on Ukraine as a key element in a union of ex-Soviet states and might also fear the Kiev uprising could inspire his own opponents, the finance minister said the next tranche of a $15-billion loan package agreed in December would not be paid, at least before a new government is formed.

Russian Foreign Minister Sergei Lavrov, according to his office, told U.S. Secretary of State John Kerry the opposition had "seized power" by force by ignoring the EU-brokered truce on Friday that left Yanukovich in office for the time being. Lavrov said that power-sharing agreement should be revived.

However, even lawmakers from Yanukovich's own party voted for his removal on Saturday and issued a statement blaming him and his entourage for the crisis. Business "oligarchs" - rich from control of ex-Soviet assets - also distanced themselves from a man long seen as their representative in the presidency.

In a mark of passions dividing Ukrainians along a historic faultline between Russian and Ukrainian cultures, local television in Kerch, in eastern Crimea, showed a crowd hauling down the blue-and-yellow Ukrainian flag in front of the town hall and hoisting the white, blue and red Russian tricolour.

Yanukovich, whose whereabouts remain unclear but who may be in his home city of Donetsk near the Russian border, accused opponents of a Nazi-style coup and said he remained in power.

In a hectic round of voting in parliament, lawmakers rushed in some crowd-pleasing measures against the ousted administration, conscious that those still occupying Independence Square - or the Maidan - remain deeply suspicious of the political class.

They stripped Yanukovich of his abandoned country home near Kiev. Its brash opulence, complete with ostrich farm and hot tubs, was put on display within hours and fuelled demands that the rough-hewn former petty criminal from the eastern coalfields be held to account for stealing taxpayer billions.

Several officials and ministers were singled out for being removed from office, among them an education minister accused of promoting a Russian view of Ukrainian history.

Parliament-appointed security officials announced legal moves against members of the ousted administration and those responsible for police attacks on the Maidan last week.

His ally, Tymoshenko, defeated by Yanukovich in a 2010 presidential election and later jailed for corruption, ruled herself out as interim premier. Freed from a prison hospital on Saturday after more than two years in jail, she may want time to recover and build support before running for the presidency.

As prime minister following the largely peaceful Orange Revolution of 2004-05, which overturned a first presidential victory by Yanukovich, Tymoshenko disappointed many in Ukraine who had hoped for an end to the corruption and failed economic policies that marked the aftermath of Soviet communism.

"In these days the most important thing is to form a functioning government," said Vitaly Klitschko, a former world boxing champion and also a possible presidential contender.

"We have to take very important steps in order to ensure the survival of the economy, which is in a very bad shape," he told a news conference. He denied there had been a coup.

"Parliament is the last legal official institution in Ukraine," he said. "Nobody knows where the president of Ukraine is. We tried to find him all day yesterday. His location is unknown. He left the country without a president."

On Independence Square, thousands filed through to pay their respects to last week's victims. Men were still wandering around with clubs and wearing home-made body armour, helmets and in some cases ski masks and camouflage fatigues.

"We'll stay here to the very end," said one, Bohdan Zakharchenko, 23, from Cherkasy, south of Kiev. "We will be here till there's a new president."

Promoted
Listen to the latest songs, only on JioSaavn.com
Another, Vitaly Servin, 25, from Luhansk, near the Russian border, said of separatists who might divide Ukraine along its historic and linguistic faultline: "There are people who want to split the country in two. We will not allow this."

Yaroslav Stashenko, 36, from, the Ukrainian-speaking western city of Lviv, near the Polish frontier, said as he warmed himself by a campfire on the square: "We want Yanukovich dragged here ... He's a coward. He's hiding like a rat."
© Thomson Reuters 2014
Comments
UkraineKiev clashes