US Wants North Korea Freeze As Beginning, Not End, Of Denuclearisation

U.S. Secretary of State Mike Pompeo has said the talks would likely happen "sometime in July ... probably in the next two or three weeks." 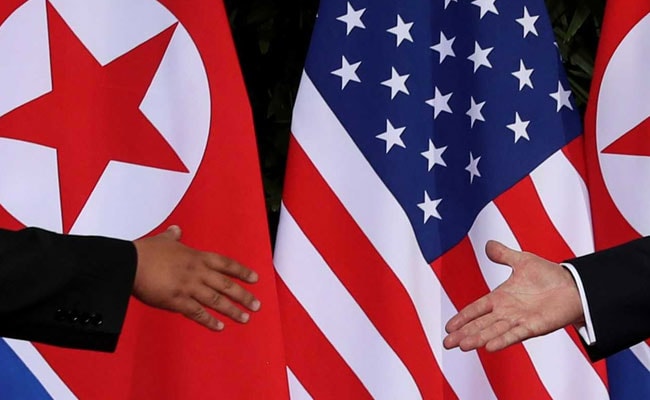 North Korea has frozen nuclear weapons testing since 2017, but US officials believe it has expanded.

The United States would hope to see a freeze in the North Korean nuclear programme as the start of a process of denuclearisation, the State Department said on Tuesday, ahead of fresh talks with Pyongyang supposed to take place this month.

U.S. President Donald Trump and North Korean leader Kim Jong Un had a surprise meeting at the end of June in the Demilitarized Zone (DMZ) between the two Koreas and agreed to resume a working-level dialogue, stalled since a failed summit in Vietnam in February.

U.S. Secretary of State Mike Pompeo has said the talks would likely happen "sometime in July ... probably in the next two or three weeks."

The Trump administration has dismissed a New York Times report that said an idea was taking shape among U.S. officials to seek to negotiate a nuclear freeze by North Korea, rather than its complete denuclearisation, thereby tacitly accepting it as a nuclear state.

North Korea has frozen nuclear bomb and missile testing since 2017, but U.S. officials believe it has expanded its arsenal by continuing to produce bomb fuel and missiles. They are keen to see a freeze in this production too.

She said the U.S. special representative for North Korea, Stephen Biegun, would meet his South Korean counterpart during a visit to Europe this week to discuss ways to achieve this.

The DMZ encounter, initiated by a spur-of-the-moment tweet by Trump that Kim said took him by surprise, showed a rapport between the two men but policy analysts said they appear no closer to narrowing the gap between U.S. demands for denuclearisation and North Korea's demand for sanctions relief.

The two sides have yet to even agree a common definition of denuclearisation, which North Korea has taken to include the U.S. nuclear umbrella protecting Japan and South Korea. Washington has demanded that Pyongyang give up its nuclear weapons unilaterally.