Kamala Harris said: "The American people have had to sacrifice far too much because of the incompetence of this administration." 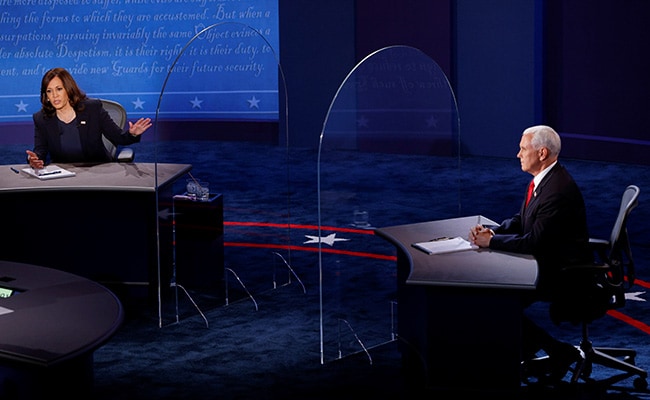 Here are some of key quotes from the debate, which was moderated by USA Today journalist Susan Page.

Asked about the COVID-19 death toll, Pence: "I want the American people to know that from the very first day President Donald Trump has put the health of America first."

Mike Pence: "The reality is when you look at the Biden plan it reads an awful lot like what President Trump and I and our task force have been doing every step of the way.... it looks a little bit like plagiarism."

Kamala Harris: "The American people have had to sacrifice far too much because of the incompetence of this administration."

Kamala Harris on vaccine: "If the public health professionals, if Dr. Fauci, if the doctors tell us that we should take it, I'll be the first in line to take it absolutely, but if Donald Trump tells us to take it, I'm not taking it."

Mike Pence: "The fact that you continue to undermine public confidence in a vaccine - if the vaccine emerges during the Trump administration - I think is unconscionable ... stop playing politics with people's lives."

Mike Pence: "On Day One, Joe Biden's going to raise your taxes."

Kamala Harris: "Joe Biden has been very clear: he will not raise taxes on anybody that who makes less than $400,000 a year."

Mike Pence: "Now with regard to climate change, the climate is changing. But the issue is, what's the cause? And what do we do about it? President Trump has made it clear that we're going to continue to listen to the science."

Mike Pence: "We don't need a massive $2 trillion Green New Deal that would impose all new mandates on American businesses and American families."

Kamala Harris: "We have seen a pattern with this administration, which is they don't believe in science."