US Unveils Uniforms For Its Space Force. This Is What It Looks Like

The Space Force will encompass broader missions like training, procurement, long-term planning and other functions. 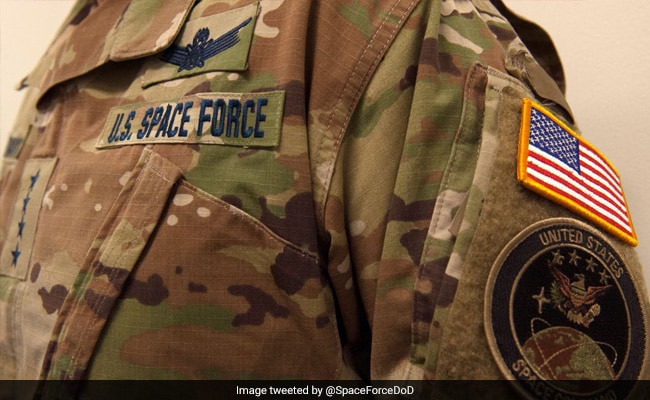 The uniform caused a stir on the internet, drawing thousands of reactions, including praise and mockery.

The United States Space Force -- the country's newest military service in seven decades -- has revealed its new uniform. The unit unveiled the picture of the new camouflaged uniform with its new name tapes on its official Twitter account on Saturday.

The Twitter post also shows a full color flag on the left arm, which according to reports would be unique to the Space Force as airmen wear a spice brown flag on the right arm.

The first #SpaceForce utility uniform nametapes have touched down in the
Pentagon. @EsperDoD@SecAFOfficial@SpaceForceCSO@GenDaveGoldfein@DeptofDefense@usairforcepic.twitter.com/Jvzt5bvNl7

The photo immediately caused a stir on the internet, drawing thousands of reactions, including praise, outrage and mockery.

Some asked why the members of the Space Force would wear camouflage in space.

How many trees are you expecting to find in space

The Space Force in response said using the same camouflage pattern as the other services helps as it "saves taxpayer dollars, in addition to establishing uniformity within the U.S. military."

We don't. Space Operators are on the ground, on Earth working with joint partners like the @usairforce and @USArmy. Hence utilizing their uniform.

Amid the criticism, there were some who came in defence of the space force.

Why is everyone cracking on the fact they're camo? That's always been a military thing and you're not exactly in space yet. Even if you were...what do you think you're hiding from? If something really is out there...it's going to find you, moon camouflaged or not.

Folks blabbering on out about not needing camo in space is peak civilian. Not everyone is going to be floating around up there, people.

The force was officially launched by US President Donald Trump on December 20.

The Space Command will focus on war fighting -- akin to the Pentagon's regional commands like CentCom -- while the Space Force will encompass broader missions like training, procurement, long-term planning and other functions.

The Space Force will be comprised of about 16,000 Air Force and civilian personnel, according to Air Force Secretary Barbara Barrett.