Inspired by the demonstrations that crippled Canada's cities for weeks, the protestors want an end to mask mandates and vaccination requirements. 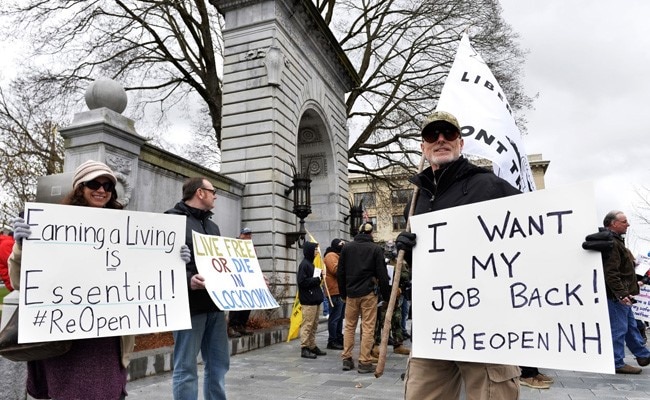 The caravan was expected to start out later Wednesday on an 11-day drive to the Washington DC. (File)

Hundreds of truckers and their supporters gathered in southern California on Wednesday ahead of a planned convoy across the United States to protest against pandemic restrictions.

Inspired by the demonstrations that crippled Canada's cities for weeks, organizers of "The People's Convoy" want an end to mask mandates, vaccination requirements and business shut-downs that are intended to slow the march of COVID-19.

"Let's get back to normal," said Bryan Brase, whose rig was near the front of the caravan in the small town of Adelanto.

"I think everybody's here for different reasons, but it all boils down to the same thing: Freedom and liberty," said Shane Class, who had travelled from Idaho to join the rally.

"It's time for our government to start understanding that people want that freedom in the Constitution back."

The caravan was expected to start out later Wednesday on an 11-day drive to the Washington DC area, arriving on March 5, though organizers say they do not intend to enter the city itself.

That assurance has not prevented the mobilisation of 700 National Guard to provide added security around the nation's capital, as authorities fret over a possible repeat of the January 6, 2021 invasion of Congress by supporters of defeated president Donald Trump.

Pentagon Press Secretary John Kirby said Guardsmen would not be armed, and will not be empowered to arrest people, but would be reporting wrongdoing to local police.

A number of large vehicles, including snow-ploughs and garbage trucks have been deployed on the streets of the capital to prevent access to sensitive sites.

Convoy organizers stress on their website that it is a non-partisan movement that includes both Republicans and Democrats, though there were plenty of flags signifying support for Trump among participants in Adelanto.

Many of those AFP spoke to voiced arguments common on the libertarian right.

"I can no longer work at my facility, a major health organization, without submitting a religious exemption," said one Los Angeles-based nurse who did not wish to give her name.

"So in order for me to earn a living for my family, I have to call on the holy and righteous name of Jesus."

The movement has attracted more than $450,000 of donations, according to the website, which organizers say will be used to reimburse fuel and other costs borne by participating truckers.

The convoy starting from Adelanto is just one of a number of planned truckers' events beginning in various parts of the country.

Others are due to depart from Texas, North Dakota, Washington state and Ohio over the coming days, according to greatamericanpatriotproject.org.