A U.S. official told Reuters the number of U.S. personnel killed was likely to rise even higher. More than a dozen were wounded. 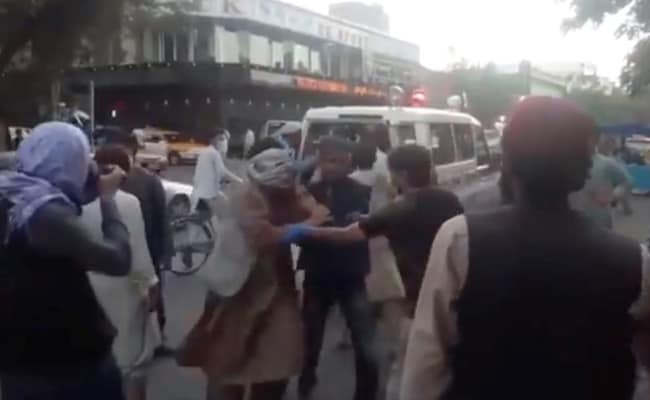 US officials said one bomb detonated near the airport's Abbey Gate, other was close to Baron Hotel

American forces in Kabul were bracing for more Islamic State attacks while winding up their evacuation mission, U.S. officials said, as the number of US troops killed in Thursday's suicide bomb attack rose to 13.

A U.S. official told Reuters the number of U.S. personnel killed was likely to rise even higher. More than a dozen were wounded.

The attack marked the first U.S. military casualties in Afghanistan since February 2020 and represented the deadliest incident for American troops in the country in a decade.

At least two explosions tore through crowds that had thronged the gates of Hamid Karzai International Airport desperate to leave Afghanistan since the Taliban seized power almost two weeks ago ahead of U.S. President Joe Biden's Aug. 31 deadline to withdraw American troops after two decades.

In a statement, Islamic State claimed responsibility and said one of its suicide bombers had targeted "translators and collaborators with the American army."

"We believe it is their desire to continue these attacks and we expect those attacks to continue - and we're doing everything we can to be prepared," McKenzie said.

McKenzie added that future potential attacks could include rockets being fired at the airport or car bombs attempting to get in. McKenzie said he saw nothing that would convince him that Taliban forces had let the attack take place.

U.S. officials said one bomb detonated near the airport's Abbey Gate and the other was close to the nearby Baron Hotel.

A massive airlift of U.S. and other foreign nationals and their families as well as some Afghans has been under way since the day before Taliban forces captured Kabul on Aug. 15, capping a swift advance across the country as American and allied troops withdrew.

The United States has been racing to carry out the airlift before its military is set to fully withdraw from the country by August 31. McKenzie said the evacuation mission was not going to stop.

"I think we can continue to conduct our mission, even while we are receiving attacks like this," McKenzie said, adding that U.S. forces will "go after" the perpetrators of Thursday's attack.

McKenzie said there were about 1,000 U.S. citizens estimated to be still in Afghanistan. A spokesperson for the State Department said more than two thirds of these Americans had informed it they were taking steps to leave Afghanistan.

Islamic State militants have emerged in Afghanistan as enemies both of the West and the Taliban. A 2001 US-led invasion toppled the Taliban from power after the group had harbored the al Qaeda militants responsible for the Sept. 11 attacks on the United States. The U.S. military deaths in the Afghanistan war since 2001 stood at roughly 2,500.

Afghan health officials were quoted as saying 60 civilians died, but it was not clear whether that was a complete count. Video uploaded by Afghan journalists showed dozens of bodies and wounded victims strewn around a canal on the edge of the airport.

U.S. officials have said there are about 5,200 American troops providing airport security. The attacks came after the United States and allies had urged Afghans to leave the area around the airport because of a threat by Islamic State.

The U.S. Embassy in Kabul a day earlier had advised Americans to avoid traveling to the airport and said those already at the gates should leave immediately, citing unspecified "security threats."

The United States and its allies have mounted one of the biggest air evacuations in history, bringing out about 95,700 people, including 13,400 on Wednesday, according to the White House.