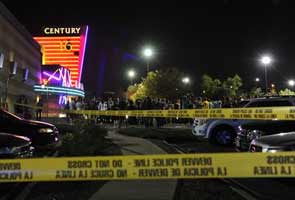 Centennial, Colorado: Frantic 911 calls from the US movie theater where a massacre was underway were played in court Tuesday, on the second day of hearings to decide if the alleged gunman should stand trial.

In the first of some 41 harrowing emergency calls made in a 10-minute period in Colorado, 30 loud booms could be heard in less than 30 seconds, making it difficult for the 911 dispatcher to hear what was being said.

In another, six minutes after the first call logged at 11:38 pm, 14-year-old Kaylin Bailey told the emergency operator that her two cousins had been shot, and that one of them did not appear to be breathing.

"We need to start CPR (cardio-pulmonary resuscitation) on your cousin who's not breathing," said the operator.

"I can't hear you" responded Bailey, amid continuing chaos in the background in the theater in Aurora, outside Denver.

The emotionally fraught preliminary hearings opened Monday with police describing harrowing scenes as they responded to the theater, where 25-year-old James Holmes is accused of opening fire on July 20 last year.

A number of officers choked back tears as they testified about the night, in which 12 people were killed and dozens more injured at the midnight screening of the Batman movie "The Dark Knight Rises."

Promoted
Listen to the latest songs, only on JioSaavn.com
The Aurora massacre revived the perennial US debate over gun control -- an issue re-ignited even more intensely by last month's shooting of 20 young children at a Connecticut elementary school