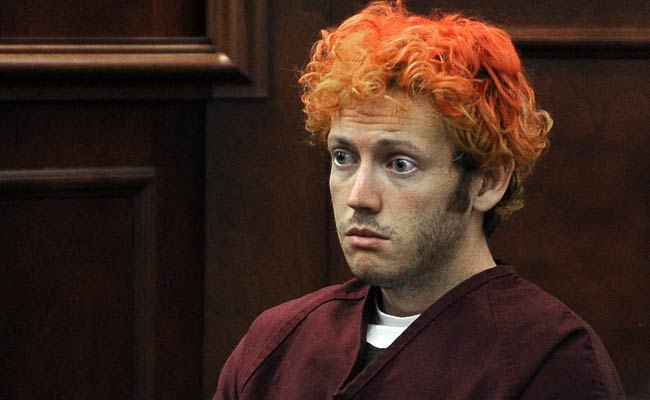 The 27-year-old, who has pleaded not guilty due to insanity, listened calmly as the judge gave preliminary remarks at the trial, which could see him face the death sentence for the 2012 shootings.

The troubled graduate student - who had a shock of orange hair when first seen after the attack - sported neatly-trimmed brown hair and beard for Monday's first court session.

Holmes has been in custody since the night of the mass murder in Aurora, Colorado on July 20, 2012, which also left 70 people injured. He allegedly dressed up as Batman villain the Joker.

Prosecutors were to spend two hours making their opening arguments on the first day of the trial proper, before a presentation of the same length by defense attorneys.

If convicted, Holmes could face the death penalty. Much of the trial is expected focus on whether he was sane at the time of the massacre.

A panel of 12 jurors and 12 alternates was selected after attorneys questioned over 1,000 of the 9,000 residents of Arapahoe County who received summons since January, when jury selection began.

The trial is likely to hear some grisly and harrowing evidence.

The defense on Monday was still fighting the judge's decision to let the jury see graphic images of the crime scene, including a 90-minute silent video of the inside of the theater.

In preliminary hearings, prosecutors said Holmes had enough ammunition to kill everyone in the crowded theater showing "The Dark Knight Rises."

His apartment was later found to be booby-trapped with an array of home-made explosive devices, which police had to disarm before entering the dwelling.

Holmes appeared in court initially with flaming orange hair, apparently to mimic the Joker, who also had colored hair in the Batman movies.

Proceedings have dragged on for more than two-and-a-half years because the prosecutor is seeking the death penalty, according to Denver attorneys following the case. The defendant has undergone two psychiatric examinations.

Holmes's parents, Robert and Arlene Holmes, wrote a letter to the editor of The Denver Post in December saying their son had never harmed anyone prior to the shooting.

"He is not a monster. He is a human being gripped by a severe mental illness," the couple wrote of their son, who was a neuroscience graduate student at the University of Colorado School of Medicine before the shooting.

If he is found not guilty by reason of insanity, Holmes will be confined to a state mental hospital. To win a release, he would have to be found free of mental illness and no longer a danger to himself or to others.

Attorneys say that is not likely to happen, as no psychiatrist would be willing to sign off on releasing him.

Relatives of victims of the massacre are expected to attend the trial.

Promoted
Listen to the latest songs, only on JioSaavn.com
Marcus Weaver, a survivor, said he has forgiven Holmes. "When all is said and done, .. God loves all his children, even the sick ones," he wrote on his Facebook page, according to the Denver Post.

"So I forgave him for what he did ... It allowed me to move forward," he said.