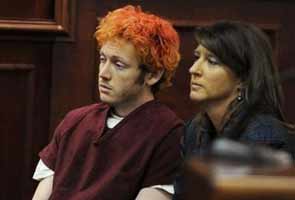 Centennial, Colorado: A US judge entered a plea of not guilty Tuesday on behalf of alleged Aurora theater gunman James Holmes, and set an August date for him to stand trial over the horrific massacre.

The 25-year-old's lawyers said they were not yet ready to enter a plea at Holmes's arraignment for the killing of 12 people in the Colorado town of Aurora last July.

Judge William Sylvester said lawyers for Holmes -- who watched proceedings wearing a reddish prison jump suit in a courtroom packed with relatives -- could enter a plea of not guilty by reason of insanity at a later date.

His trial will start on August 5 and last four to six weeks, depending on whether the state seeks the death penalty. Colorado currently has three convicted prisoners on death row, but has not executed anyone since 1979.

When Holmes first appeared in court last year he had bright orange hair and looked befuddled. He has since let his hair color grow out, and now sports curly brown hair and a beard.

The alleged gunman sat silently Tuesday, staring blankly straight ahead or at the ceiling. His parents Robert and Arlene, who live near San Diego, were in court.

The judge set a schedule of pre-trial hearings including one on April 1 when prosecutors can say if they will seek the death penalty.

There will be three days of pre-trial hearings from May 13-15, and another hearing on July 25, before the full scheduled trial.

Defense attorney Daniel King said he might be ready to make a plea by May 1 or June 1.

"Your orders place us in a bit of Catch-22 as to how to proceed," King told the judge. "We are unsure how statements made by him during any psychiatric examinations will be used in the event" that a death penalty case proceeds.

Prosecutors objected and said they had waited long enough.

"Good cause has not been shown to continue the arraignment," lead prosecutor Karen Pearson told the judge, who agreed, and entered a standard not guilty plea.

Holmes is accused over the July 20 massacre at a midnight screening of the Batman movie, "The Dark Knight Rises," which revived America's long-running debate about gun control.

His arraignment initially had been scheduled for January, but the judge agreed at that time to delay it, triggering anger from some of the victims' relatives.

During three days of pre-trial hearings in January, prosecutors called witnesses who gave chilling accounts of the slaughter, and played 911 emergency calls in which the chaos and loud booms of gunshots could be clearly heard.

They presented evidence that Holmes had planned the attack well in advance.

Court pleadings this week indicated that Holmes was hospitalized in mid-November under a psychiatric watch by Arapahoe County Sheriff's deputies who were concerned he could hurt himself.

At least part of his several-day hospital stay was spent in restraints, defense attorneys told the court.

Promoted
Listen to the latest songs, only on JioSaavn.com
Victims of the shootings filled half the courtroom and an overflow adjacent courtroom. The last survivor to be released from hospital, Caleb Medley, appeared for the first time.

Medley, who suffered a brain injury, is in a wheel chair. His wife, Katie Medley, who was also injured, gave birth to the couples's first child a day after the shooting.