While Beijing and Moscow seek to expand their global reach, Director of National Intelligence Dan Coats said, some American allies are pulling away from Washington in reaction to changing U.S. policies on security and trade. 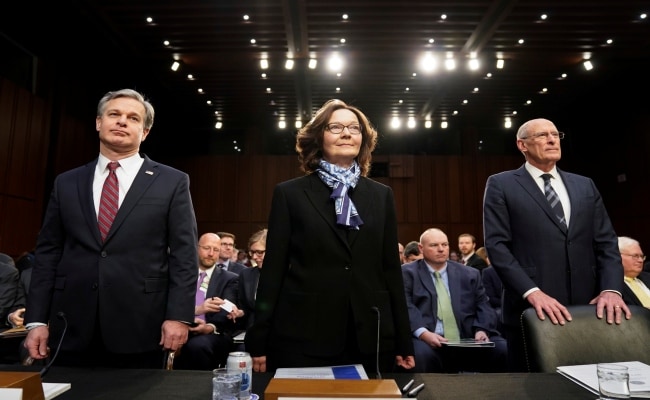 China and Russia pose the biggest risks to the United States and are more aligned than they have been in decades, U.S. intelligence leaders told senators on Tuesday, in testimony that repeatedly contradicted President Donald Trump's statements on global threats.

While Beijing and Moscow seek to expand their global reach, Director of National Intelligence Dan Coats said, some American allies are pulling away from Washington in reaction to changing U.S. policies on security and trade.

"China, Russia, Iran, and North Korea increasingly use cyber operations to threaten both minds and machines in an expanding number of ways - to steal information, to influence our citizens, or to disrupt critical infrastructure," Coats said. He testified with the directors of the CIA, FBI and other top intelligence officials at the Senate Intelligence Committee's annual hearing on worldwide threats.

"Moscow's relationship with Beijing is closer than it's been in many decades," Coats told the panel.

The intelligence chiefs' assessments broke with some past assertions by their boss, including on the threat posed by Russia to U.S. elections and democratic institutions and North Korea's determination to denuclearize.

Coats said North Korea is unlikely to give up its nuclear weapons. Trump has said the country no longer poses a threat.

The intelligence officials also said Iran was not developing nuclear weapons in violation of the 2015 nuclear agreement, even though Tehran has threatened to reverse some commitments after Trump pulled out of the deal.

"Increased cooperation between Russia and China - for a generation that hasn't been the case - that could be a very big deal on the horizon in terms of the United States," said Senator Angus King, an independent who caucuses with Democrats.

Coats also said some U.S. allies are seeking more independence, responding to their perceptions of Washington's changing policies on security and trade, and "are becoming more open" to new partnerships.

The officials painted a multifaceted picture of the threat posed by China, as they were questioned repeatedly by senators about the No. 2 world economy's business practices as well as its growing international influence.

Senator Richard Burr, the committee's Republican chairman, said the government must work with private companies to foster innovation, while balancing concern about security risks. Many lawmakers have blasted technology companies over the past two years for doing too little to fight the spread of false news reports and other misinformation.

Coats said intelligence officials have been traveling around the United States and meeting with corporate executives to discuss espionage threats from China.

He said Russia's social media efforts will continue to focus on aggravating social and racial tensions, undermining trust in authorities and criticizing politicians perceived to be anti-Russia.

Senator Mark Warner, the panel's top Democrat, said he was particularly concerned about Russia's use of social media "to amplify divisions in our society and to influence our democratic processes" and the threat from China in the technology arena.

The Senate Intelligence Committee is one of several congressional panels, along with Special Counsel Robert Mueller, that have been investigating whether there were any connections between Trump's 2016 and Russian efforts to influence the election.

Coats declined to respond when Democratic Senator Ron Wyden asked whether Trump's not releasing records of his discussions with Russian President Vladimir Putin put U.S. intelligence agencies at a disadvantage.

"To me from an intelligence perspective, it's just Intel 101 that it would help our country to know what Vladimir Putin discussed with Donald Trump," Wyden said.

The intelligence officials were due to continue testifying to the committee at a classified hearing later on Tuesday.

(Except for the headline, this story has not been edited by NDTV staff and is published from a syndicated feed.)
Comments
United StatesUS Spy Chiefs