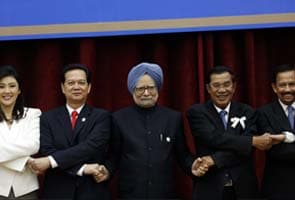 Washington: President Barack Obama and southeast Asian leaders launched an initiative aimed at expanding trade and investment ties between the United States and 10 countries in southeast Asia, the White House said on Monday.

The countries announced the start of the process at a meeting of the Association of Southeast Asian Nations, or ASEAN, in Cambodia, where Obama is visiting Phnom Penh for a regional summit.

Actions outlined in the initiative - the US-ASEAN Expanded Economic Engagement - are aimed at smoothing a path for Asian nations to link up with the Trans-Pacific Partnership, a trade agreement the United States is negotiating with ten countries in Asia and the Western Hemisphere, the White House said.

The joint action could also help Washington solidify its presence in a complex mosaic of regional trade and economic alliances in an economically vibrant region attractive to many US businesses.

By seeking to open the door to the US-led Trans-Pacific Partnership (TPP), the United States is keeping pace with another regional grouping - the Regional Comprehensive Economic Partnership (RCEP) - that is forming among southeast Asian nations and other countries in the region, including China and India.

Generally, that arrangement is expected to be less ambitious than the US-led partnership and there is some concern that if the Washington's demands are too stringent, countries may lose interest in the TPP in favor of the RCEP.

Four members of ASEAN are part of the Trans-Pacific Partnership - Singapore, Brunei, Malaysia and Vietnam.

For its part, the Regional Comprehensive Economic Partnership includes Japan, South Korea, Australia, New Zealand, and the ten ASEAN members - but not the United States.

The United States also wants to broaden the reach of the Trans-Pacific Partnership to include ASEAN countries that are not part of the 21-economy Asia Pacific Economic Cooperation forum. These are Cambodia, Laos, and Myanmar.