US, South Korea To Launch Major Navy Drill Next Week

Tensions over North Korea's weapons programme have soared in recent months with Pyongyang launching a flurry of missiles and conducting its sixth and most powerful nuclear test in defiance of multiple sets of UN sanctions. 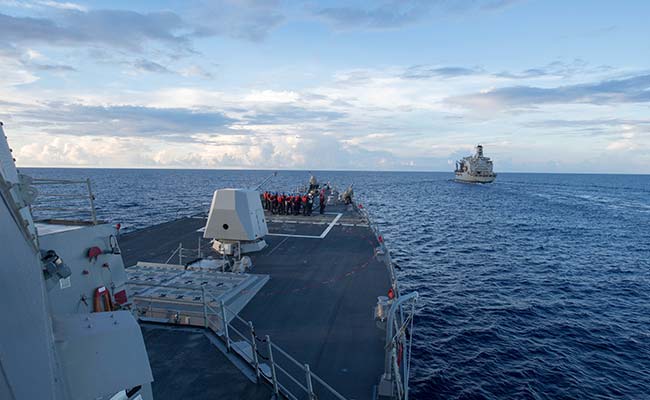 Seoul: The United States and South Korea will kick off a major navy drill next week, the US navy said Friday, a fresh show of force against North Korea over its missile and nuclear tests.

Tensions over North Korea's weapons programme have soared in recent months with Pyongyang launching a flurry of missiles and conducting its sixth and most powerful nuclear test in defiance of multiple sets of UN sanctions.

The United States has since ramped up military drills with South Korea and Japan, its two closest regional in the region.

In a statement the US 7th Fleet said the USS Ronald Reagan aircraft carrier and two US destroyers would take part in the drill alongside South Korean Navy vessels.

The exercise, slated for October 16 to 26 in the Sea of Japan and the Yellow Sea, would promote "communications, interoperability, and partnership," the statement added.

The move will likely rile Pyongyang which had previous warned against any upcoming joint exercises.

"If US imperialists and the South Korean puppets ignite a nuclear war of aggression against us, it would only advance their own demise," the state-run KCNA news agency said.

There has been a flurry of US military hardware movement around the Korean peninsula in recent days.

On Friday the nuclear-powered USS Michigan submarine arrived at South Korea's southern port of Busan, according to Yonhap news agency, just days after another nuclear-powered submarine -- the USS Tuscon -- left after a five day visit.

Earlier this week the US flew two supersonic heavy bombers over the Korean peninsula, staging the first night-time joint aviation exercises with Japan and South Korea.

That mission came 17 days after four US F-35B stealth fighter jets and two B-1Bs flew over the peninsula.

On Tuesday Trump  discussed "a range of options" with his national security team to respond to North Korea's recent missile and nuclear tests.

Promoted
Listen to the latest songs, only on JioSaavn.com
It came days after he said that diplomatic efforts with North Korea have consistently failed, adding that "only one thing will work".

The North's missile and nuclear capabilities have made significant progress under Kim, who on Saturday told party officials that the country's atomic weapons were a "treasured sword" to protect it from aggression.