Still In Charge On North Korea And Works With Japan: Mike Pompeo

Mike Pompeo led four-way talks in Washington of the US and Japanese foreign affairs and defense chiefs, the latest in a flurry of major meetings scheduled between the close allies. 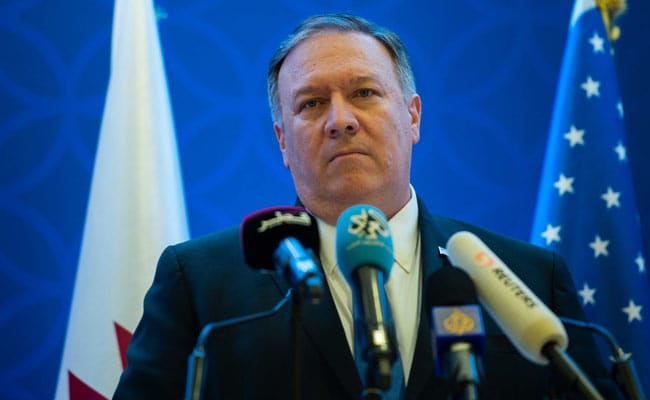 "Nothing has changed. We continue to work," Mike Pompeo told a joint news conference.

US Secretary of State Mike Pompeo said Friday he remained in charge of negotiating with North Korea despite the regime's demands to exclude him, as he voiced guarded hope with Japan on securing a deal.

Pompeo led four-way talks in Washington of the US and Japanese foreign affairs and defense chiefs, the latest in a flurry of major meetings scheduled between the close allies.

Amid a standstill with North Korea, Pompeo brushed aside an angry statement this week in which Pyongyang called the top US diplomat "reckless" and immature and demanded that he be removed from future negotiations.

Pompeo is believed to have encouraged Trump, who has admitted to having a soft spot for Kim Jong Un, to hold firm with North Korea's young authoritarian leader during a summit in February in Hanoi that ended in deadlock.

"Nothing has changed. We continue to work," Pompeo told a joint news conference.

Pompeo, who traveled four times last year to Pyongyang as he eased once soaring tensions, said he was still hopeful for an agreement that would solidify Kim's promises to give up the nuclear arsenal which his dynasty has built over decades.

"I'm convinced we'll still have a real opportunity to achieve that outcome and our diplomatic team will continue to remain in the lead," Pompeo said.

Trump has repeatedly voiced admiration for Kim and last month blocked the imposition of tough new US sanctions on North Korea, saying he wanted to preserve the relationship despite Pompeo's vow to keep up maximum pressure.

Japan, which closely aligns its foreign policy with the United States, has publicly backed Trump but is seen as deeply cautious.

Conservative Prime Minister Shinzo Abe built his political career campaigning for tough action on North Korea over its abductions of Japanese civilians in the 1970s and 1980s to train the regime's spies.

Foreign Minister Taro Kono nonetheless reiterated after the talks in Washington that Abe was willing to meet Kim "if there is a chance."

"Japan is ready to normalize its relationship with North Korea when these missile, nuclear and abduction issues are taken care of," Kono said.

Abe will visit Washington next week to meet Trump, with whom he has built a friendly rapport. Trump and his wife Melania will then head to Japan next month as the first state guests after Naruhito is enthroned as Japan's emperor.

Japan will also hold a summit of the Group of 20 major economies in Osaka in June, although Trump has not yet confirmed his attendance.

In its latest effort to enlarge the security umbrella for Japan, the United States said that cyber attacks against its ally could trigger a response from Washington.

"The United States and Japan affirmed that international law applies in cyberspace and that a cyber attack could, in certain circumstances, constitute an armed attack under Article V of the US-Japan Security Treaty," Pompeo said.

Article V declares that an assault on Japanese territory would trigger action by the United States, which guarantees its ally's safety under the pact imposed after World War II, when Japan was stripped of its right to maintain a military.

Japanese officials have increasingly worried that hacking, especially by rivals China or North Korea, could be a more immediate threat than any traditional military operation.

Pompeo also renewed the US stance, dating from former secretary of state Hillary Clinton, that Article V covers the Senkakus, Japanese-administered islands in the East China Sea which Beijing claims and calls Diaoyu.