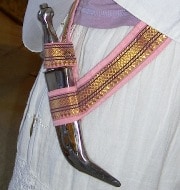 Washington: A school in Michigan's Canton township has barred students from bringing a 'kirpan' to the premises after parents objected to a fourth grader carrying the religious symbol.

The move has troubled the small Sikh community in the township near Detroit, prompting them to launch a public awareness campaign to make people realise that 'kirpan' is only a religious symbol that is completely non-threatening.

The school authorities decided to ban the carrying of kirpan within the school premises late last month after the fourth-grade Sikh student was found with a three-to-five inch kirpan.

Following a legal review, the Plymouth-Canton Community Schools district decided to ban it as it violated local, state and federal policies against carrying weapons or items that look like weapons to school, the Detroit Free Press reported.

Similar disputes have cropped up in other parts of the US as well and the incident has concerned Sikh parents and other community leaders, who argue that kirpan symbolises their commitment to fighting evils, such as greed, and has no assault value.

"It's not an assault weapon," Tejkiran Singh, 47,Canton, a Sikh community leader was quoted as saying by the newspaper. "It's so small, so blunt... The whole purpose of wearing it is that it's a reminder of our spirituality," he said.

Sikhs of the area have organised a public forum today to address concerns the city people may have about the growing Sikh community, the daily said. There are now three Sikh gurudwaras in Plymouth and Canton.

"It's to inform people about this great world religion, which many don't know anything about," said Steve Spreader, director of programmes for the Michigan Roundtable for Diversity and Inclusion, which is co-sponsoring the forum with other groups.
Comments
Kirpansikh community upsetkirpan bannedkirpan and US schools