The source declined to name the countries being targeted by Washington, though Brazil under its new President Jair Bolsonaro and oil-producing Saudi Arabia are both considered climate change sceptics. 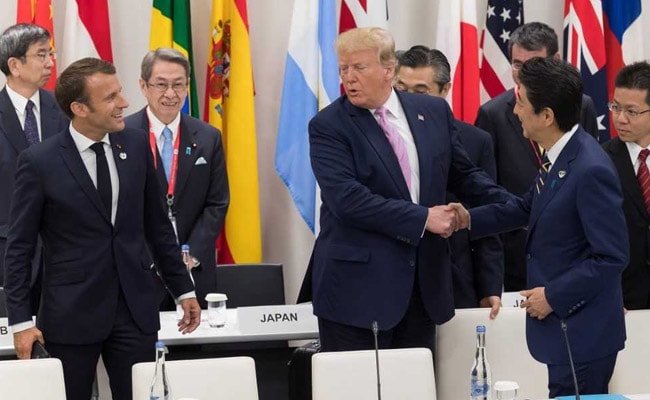 Washington is pressuring allies at the G20 to reject strong climate change language in the meeting's final statement, despite furious opposition from EU countries, a French presidential source said Friday.

"Three or four (countries) are under American pressure to water down the message," a French presidency source told reporters in Osaka, where leaders of the Group of 20 are holding a two-day summit.

The source declined to name the countries being targeted by Washington, though Brazil under its new President Jair Bolsonaro and oil-producing Saudi Arabia are both considered climate change sceptics.

Climate change is shaping up to be one of the most contentious issues at the gathering, with Europe fiercely opposed to any watering down of previous G20 statements on the subject.

Washington is opposed to any endorsement of the Paris climate deal, an agreement from which it plans to withdraw.

In recent years, the roadblock has been overcome by 19 of the members endorsing language backing the Paris deal and Washington adding its own line referring to its plan to leave the agreement.

"That's what we managed to get after a difficult fight in Hamburg and Buenos Aires, and what we want to confirm here, at a minimum," the source told reporters.

"The Americans are trying to weaken the message and to rally to their position a number of states," the source added.

At a meeting in Osaka on the summit sidelines on Friday, European leaders agreed that "we cannot accept a text that waters down what we got during the last two G20s and weakens the Paris accords," the source said.

French President Emmanuel Macron has already said that removing a reference to the Paris deal would be a "red line" for Paris, threatening to refuse to sign the final communique.

(Except for the headline, this story has not been edited by NDTV staff and is published from a syndicated feed.)
Comments
G20 alliesClimate changeEurope