"Iran will never get a nuclear weapon on my watch," Joe Biden told President Reuven Rivlin in the White House. 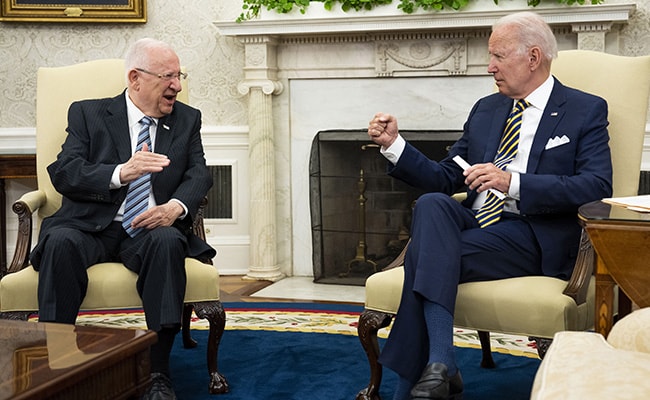 President Joe Biden on Monday reassured Israel's president, ahead of a visit by new Prime Minister Naftali Bennett, that the United States will not permit Iran to develop nuclear weapons.

"Iran will never get a nuclear weapon on my watch," Biden told President Reuven Rivlin in the White House.

After the talks, Rivlin told reporters that he was "very much satisfied" by Biden's comments on Iran and said Israel and Washington "have to cooperate."

In his comments, Biden also dismissed congressional critics who have questioned his legal authority in ordering air strikes against Iranian-backed militias accused of attacking US personnel in Syria and Iraq.

"I have that authority," Biden said.

The close US-Israeli relationship hit a rocky patch when Biden replaced Donald Trump in January. However, the formation of a new government under Bennett, following the downfall of key Trump ally Benjamin Netanyahu, has opened the door to a reset -- and a Bennett visit in the near future.

White House Press Secretary Jen Psaki said the Biden-Rivlin meeting would "highlight the strength of the relationship from our shared interest in security and stability."

Psaki said there was no date yet for Bennett's White House trip but "the president looks forward to hosting the prime minister and it's soon."

On Sunday, Israel's new foreign minister, Yair Lapid, told US Secretary of State Antony Blinken at a meeting in Rome that he was concerned about US talks with Iran over the country's nuclear ambitions. However, he pledged a more cooperative approach.

"We believe the way to discuss those disagreements is through direct and professional conversations," Lapid said.

"In the past few years mistakes were made," Lapid added, referring to Netanyahu's alliance with Trump's Republican party. "We will fix those mistakes together."