Trump Signals US Is Likely To Exit Paris Climate Deal

Donald Trump tweeted that he would announce his decision about whether the United States will remain in the 190-nation pact on Thursday. Abandoning it would honor a Trump campaign vow but risk rupturing global alliances. 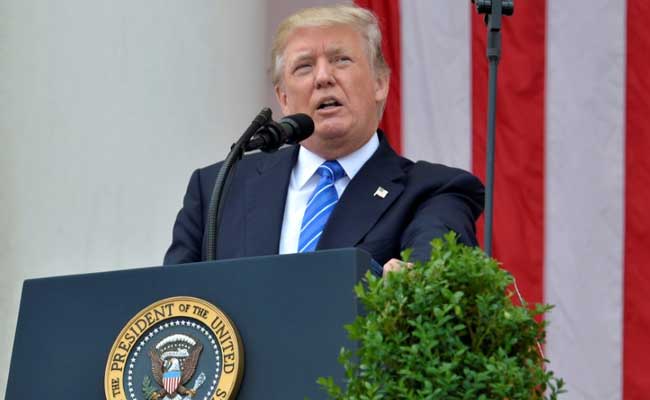 President Donald Trump is still undecided but leaning toward withdrawing the United States from the landmark Paris climate agreement, White House officials said Wednesday, a move that would honor a campaign vow but risk rupturing global alliances and disappointing both environmentalists and corporate titans.

Although officials warned that Trump's thinking could shift before he announces his decision Thursday, a U.S. exit from the climate pact could have severe ramifications internationally. It could raise doubts about the commitment of the world's largest economy to curbing global warming and make it more difficult to hold other nations to their environmental commitments.

All but two countries - Nicaragua and Syria - signed onto the 2015 accord, which was a signature diplomatic achievement for President Barack Obama.

The Paris agreement has long divided the Trump administration, with the president taking much of the spring to make up his mind amid an intense campaign by both sides to influence his decision.

Secretary of State Rex Tillerson and Ivanka Trump, the president's daughter and adviser, are among those who have urged him to stay in the deal. White House chief strategist Stephen Bannon and Environmental Protection Agency Administrator Scott Pruitt have pushed for a withdrawal, which wouldn't actually be finalized until near the end of Trump's term.

Although the White House signaled that Trump was likely to announce an exit from the Paris accord, it made no public announcement Wednesday. Trump tweeted that he would announce his decision Thursday at 3 p.m. in the White House Rose Garden. The president has a history of changing his mind at the last minute, as he did in deciding not to pull out of the North American Free Trade Agreement after aides had suggested he would.

All day, senior administration officials cautioned that Trump had not yet made a final decision on the climate pact - and the president himself seemed eager to maintain the suspense.

Asked whether he had been hearing from CEOs trying to persuade him, Trump said, "I'm hearing from a lot of people, both ways." More than 190 nations agreed to the accord in December 2015 in Paris, and 147 have since formally ratified or otherwise joined it, including the United States - representing more than 80 percent of the world's greenhouse gas emissions.

The United States is the world's second-largest emitter of greenhouse gases. Under the Paris agreement, the United States promised to reduce its emissions 26 percent to 28 percent below their 2005 levels by 2025. As of 2015, emissions were 12 percent lower, according to the U.S. Energy Information Administration.

Hard-line conservatives have sought to convince Trump that meeting this target would be harmful to the bottom lines of U.S. businesses and would jeopardize manufacturing jobs, especially in the Midwest and other regions where Trump found deep support in last year's election.

They also have argued that staying in the Paris agreement could be used as a legal tool by environmental groups seeking to fight Trump's environmental policies.

In addition, a group of 22 Republican senators - including Senate Majority Leader Mitch McConnell, R-Ky., - wrote to Trump urging "a clean break" from the Paris agreement.

But Tillerson and other internationalists have argued that it would be beneficial to the United States to remain part of negotiations and meetings surrounding the agreement as a matter of leverage and influence.

A broad range of outsiders have lobbied Trump to remain part of the global pact, from former vice president Al Gore to Pope Francis. The administration's debate has triggered an outpouring of lobbying from corporate America as well, as Apple, ExxonMobil and other major companies have strongly supported the accord.

During Trump's maiden foreign trip last week, a number of European leaders sought to persuade Trump of the magnitude of the climate change crisis and the importance of American leadership to address it.

As a candidate, Trump railed against the Paris accord and pledged to scrap it, as part of his "America First" agenda to promote economic nationalism and disentangle the United States from international agreements that he considers harmful.

Trump also said he thought climate change was a "hoax." Asked by a reporter Wednesday whether he still believes so, the president said only, "Thank you, everybody."

News reports Wednesday that Trump was expected to withdraw from the Paris accord sparked swift and strong reactions.

Elon Musk, the chief executive of Tesla and a member of a White House manufacturing jobs advisory board, tweeted that if Trump does exit, he would have "no choice" but to end his affiliations with the administration.

Mitt Romney, the 2012 Republican presidential nominee and one of Trump's finalists for secretary of state, tweeted, "Affirmation of the #ParisAgreement is not only about the climate: It is also about America remaining the global leader."

"This would be yet another example of President Trump's 'Putting America Last' agenda - last in innovation, last in science, and last in international leadership," Bennet said in a statement.

Others cheered the notion that Trump might soon kill the climate agreement that had been an Obama legacy item.

"President Trump's decision sends a strong message to the environmentalist movement: no longer will the United States be strong armed by their scare tactics intended to harm our economy and inhibit economic growth," David McIntosh, president of the Club for Growth, a conservative political action group, said in a statement.

A party that has fully joined the accord, as the United States has, cannot formally withdraw for three years after the agreement was entered into force in 2016 - and that is capped by an extra year-long waiting period. Under those rules, Trump could not complete a U.S. exit from the agreement until Nov. 4, 2020 - the day after the next presidential election.

European Commission President Jean-Claude Juncker said he tried to explain to Trump during their climate discussions last week that withdrawing from the pact was no simple task.

"Not everything in international agreements is 'fake news,' " Juncker said Wednesday. He added, "This notion, 'I am Trump, I am American, 'America First' and I'm going to get out of it' - that won't happen. We tried to explain that to Mr. Trump in Taormina in clear German sentences. It seems our attempt failed." Taormina is the Sicilian resort town where the Group of Seven leaders met last week.

Trump also could opt to withdraw from the more foundational U.N. Framework Convention on Climate Change, which laid the groundwork for the Paris deal and was signed by President George H.W. Bush and ratified by the Senate in the early 1990s.

But that is a more radical move, which would further withdraw the United States from all international climate change negotiations.

The Trump administration already has rolled back key Obama administration initiatives through executive action, including the EPA's Clean Power Plan, which was a key part of the U.S. promise through the Paris agreement. These policies have made it highly unlikely that the United States could honor its Paris pledge to sharply cut carbon dioxide emissions.

That leaves Trump with two clear choices: withdraw from the Paris agreement or revise the U.S. emissions targets downward to a more achievable level while remaining in the pact.

A downward revision would certainly prompt criticism from the international community, but not nearly so much as an abandonment. The Paris agreement is, after all, the first global accord on climate change action that has managed to unify both developed and developing nations behind a single framework to cut emissions.

Moreover, the accord is flexible in the sense that it does not mandate that any nation achieve any particular level of emissions cuts. Rather, every nation under the agreement pledges to do the best it can, and to participate in a process in which nations will regularly increase their ambitions over time.

Recent research has highlighted that above 2 degrees, major threats could ensue for Earth systems ranging from coral reefs to the planet's vast ice sheets.

Promoted
Listen to the latest songs, only on JioSaavn.com
Here's what you need to know about the Paris agreement.