Trump Pardons Corn The Turkey, One Of The More Normal Things He's Done This Year

"Thanksgiving is a special day for turkeys," the US president said. "I guess probably, for the most part, not a very good one." 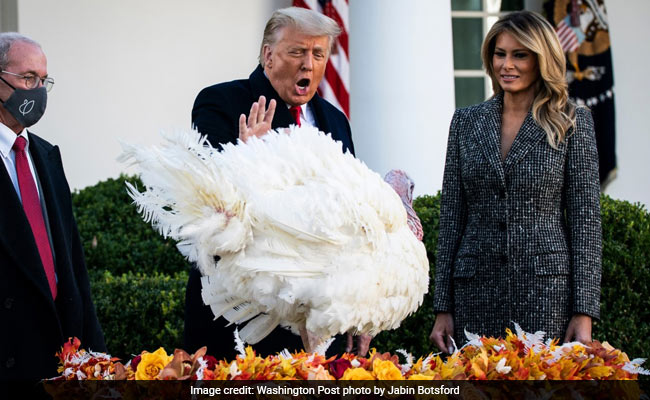 Of the two stars of the day, it's hard to know who needed a pardon more: Corn the Turkey or President Trump.

After this year's presidential turkey pardon, Corn, along with his alternate, Cob, will retire to a quiet life in a college town. Where the president will go next is less certain. A day earlier, he said he had authorized the federal government to initiate the transition to a Joe Biden administration, the closest he has come to a public concession. When Trump becomes a private citizen on Jan. 20, 2021, he will lose protection from litigation. He is facing numerous investigations and civil lawsuits.

"Thanksgiving is a special day for turkeys," the president said. "I guess probably, for the most part, not a very good one."

Pardoning a turkey is usually one of the most farcical things a president does in a year, but Trump granting clemency to a corpulent bird in the Rose Garden is somehow the most normal thing that's happened in Washington all month. In a quixotic quest to overturn election results, Trump's advisers and lawyers have been holding bizarre news conferences, getting smackdowns from judges and saying things like "Release the Kraken." (If, after the pardon, the president announced that Corn and Cob would be joining his legal team, it would have rated "shocking but not surprising.")

On Twitter, the president has cheered the efforts of his legal advisers to undermine public faith in what was, by all authoritative accounts, a secure election. But in terms of press appearances, he has been uncharacteristically shy since Biden's win. Twelve of the 20 days since the election have not included any events on the president's schedule. He has played golf at his Virginia course six times. Plotting his next steps, he has largely stayed out of the public eye.

The president appeared to be in good spirits when he arrived at the pardoning ceremony. The first lady, dressed in a gray coat, stood beside him. He opened with a nod to the day's record stock market gains ("a tremendous achievement"), and segued into the birds' Iowa upbringing ("an act of blatant pandering," said the president, who is believed already to be eyeing a 2024 run, adding, "I love the state of Iowa"). Then he gave a shoutout to the pilgrims: "The brave men and women of the Mayflower endured a bitter and dangerous winter. Very, very dangerous winter. Many were sick."

America is once again embarking into a very, very dangerous winter, with covid-19 ravaging hospitals from El Paso, Texas, to Minneapolis.

"During this Thanksgiving, we extend our eternal gratitude to the doctors, nurses, health-care workers and scientists who have waged the battle against the" novel coronavirus, he said. He praised the coming vaccine. And then he turned to the turkey.

"Look at that beautiful, beautiful bird. Oh, so lucky. That is a lucky bird," he said. It is likely that Corn and Cob will not be the last recipients of a Trump pardon.

"I wouldn't be surprised if Trump grants pardons or commutations to a whole list of people, including Paul Manafort, Roger Stone, Michael Flynn and others," says Jeffrey Crouch, an assistant professor of American politics at American University and the author of a book on presidential pardons. "He is a lame duck who has already been impeached, so the usual checks will be less effective."

Other than poultry, the pardons Trump has issued have been for "his supporters, fellow Republicans and just a handful of ordinary people," says Crouch. Those have included Joe Arpaio, an anti-immigration former sheriff of Arizona; former vice president Dick Cheney's disgraced ex-aide Scooter Libby; and conservative commentator Dinesh D'Souza. He also commuted the sentence of former Illinois governor and "Celebrity Apprentice" contestant Rod Blagojevich.

"Largely eschewing bureaucratic processes, Trump has taken advantage of the political theater that pardoning can provide," wrote Bernadette Meyler in a Stanford University law review article about her book, "Theaters of Pardoning," comparing the president's approach to that of the 17th-century British monarchy, for which pardons "often served to aggrandize the majesty of the King rather than simply omitting punishment for an offender."

Both the turkey and human pardons under this administration have been hard for those who study and practice clemency law to watch. Margaret Love, a District of Columbia attorney who represents applicants for presidential pardon and commutation of sentence, used to watch the turkey pardon with disgust. The president, she believes, should be pardoning people, not birds. "I took it all kind of seriously and thought, this is a silly, stupid exercise that does not befit the dignity of the presidency," says Love.

Under Trump, who has pardoned three soldiers accused of war crimes, the turkey pardon seems less like a departure from normal business.

"It's utterly in line with the rest of his pardoning," says Love.

The president could try to do something more outlandish than pardoning a turkey: pardoning himself. Crouch believes it is possible, though inadvisable, that the president could issue such an order. Trump has clearly considered the option. "As has been stated by numerous legal scholars, I have the absolute right to PARDON myself," he tweeted in 2018, "but why would I do that when I have done nothing wrong?"

The norms of presidential clemency with respect to turkeys shifted gradually. Presidents from Abraham Lincoln to Richard Nixon merely declined to eat the birds. President Ronald Reagan used them as a political punchline: When asked whether he would pardon Oliver North for his role in the Iran-contra affair, he joked about pardoning the turkey instead. President George H.W. Bush was the first to officially pardon the birds.

In 2011, President Barack Obama quipped about his use of executive orders in his remarks: "Some of you may know that recently I've been taking a series of executive actions that don't require congressional approval. Well, here's another one."

"As many of you know, I have been very active in overturning a number of executive actions by my predecessor. However, I have been informed by the White House Counsel's Office that Tater and Tot's pardons cannot, under any circumstances, be revoked," Trump quipped at the 2017 ceremony, alluding to the turkeys Obama had pardoned the previous year. "So we're not going to revoke them. So, Tater and Tot, you can rest easy."

In 2018, the president made remarks at the turkey pardon that now appear prescient, if ironic. "This was a fair election," he told Carrots, who had lost the online vote to Peas. "Unfortunately, Carrots refused to concede and demanded a recount, and we're still fighting with Carrots," he said. "Carrots, I'm sorry to tell you, the result did not change. It's too bad for Carrots."

Reached at "Gobbler's Rest," the Virginia Tech University retirement home for several pardoned presidential turkeys, David Linker, the university's agricultural program coordinator, says that Carrots, now 2 1/2 years old, has lived out a mostly uneventful retirement. The turkey may identify with the president who pardoned him in other ways.

"Usually when we get them, as in the last two, we put them in a pen together so they can remain friends," says Linker. But after they arrived, Peas had a brief illness. Carrots sensed the bird's weakness and attacked him.

"They started fighting," says Linker, "and we've had to keep them separated ever since."

Last year's turkey ceremony took place amid public hearings for the president's impeachment, which was led by Rep. Adam Schiff, D-Calif. Trump took the opportunity to throw some white meat to his defenders. "They've already received subpoenas to appear in Adam Schiff's basement on Saturday," Trump said of the turkeys. "Bread and Butter, I should note that, unlike previous witnesses, you and I have actually met."

On Tuesday, Trump made no references to his enemies. His tone was wistful, with a hint that the fate of legacy would soon be in someone else's hands.

Too bad for Carrots.

The president held his palm out in a gesture of benediction.

The band cued up "God Bless America," and Corn let out a throaty gobble. As the president and his wife walked away, a reporter shouted out: "Will you be issuing a pardon for yourself?"

Without reacting, he stood on the steps, posed for a photo and disappeared back into the White House, his hand on the small of the first lady's back.