"I Don't Kid": Trump Doubles Down On "Slow The Testing" Remark

Donald Trump has faced criticism for telling a campaign rally -- where most attendees did not wear masks, ignoring CDC recommendations -- that he wanted to slow coronavirus testing. 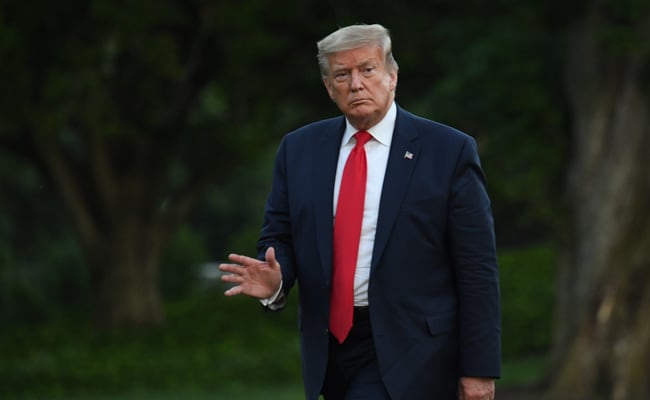 White House aides said the US president's remarks were in jest but Donald Trump doubled down. (File)

US government health experts led by Anthony Fauci warned Congress Tuesday that the country faces "historic" challenges with the coronavirus and that Americans should brace for a lengthy battle against the pandemic.

Fauci, testifying in the wake of Donald Trump's comments that he had urged health officials to "slow the testing" for coronavirus, also insisted the president never issued such an order to him.

But the government's top infectious diseases expert raised the alarm over rising case trends, telling lawmakers that several states were experiencing "a disturbing surge of infections."

The coming two weeks, Fauci added, will be "critical to our ability to address those surgings" in states like Florida, Texas and Arizona.

The US is the nation hardest hit by the virus, with more than 120,000 deaths, new outbreaks across the country, and a government showing little ability to stem the spread.

Fauci led a witness panel that stressed it was difficult to predict how long coronavirus will remain a threat.

"COVID-19 activity will likely continue for some time," the experts said in prepared testimony attributed to all of them, inducing Centers for Disease Control and Prevention (CDC) director Robert Redfield.

"These challenges are many, and they are historic," they told the House Energy and Commerce Committee hearing.

But Fauci himself said he feels "cautiously optimistic" about the pace of vaccine testing and reiterated his hope that broad production and use of a vaccine could come by "the end of this calendar year" or early 2021.

Redfield made clear that boosting testing was a "critical underpinning" of virus mitigation, joining Fauci in saying Trump has never urged them to curb it.

"None of us have ever been told to slow down on testing," Fauci told the panel. "It's the opposite. We're going to be doing more testing, not less."

Trump has faced criticism for telling a Saturday campaign rally -- where most attendees did not wear masks, ignoring CDC recommendations -- that he wanted to slow coronavirus testing.

White House aides said the president's remarks were in jest, but on Tuesday, Trump  doubled down.

"I don't kid," he told reporters before praising the US testing scheme as the best in the world.

"By having more tests, we find more cases," Trump said, even suggesting the high number is a political liability for him during an election year.

"By having more cases, it sounds bad," he said. "But actually what it is is we're finding people."

Trump has repeatedly lashed out at criticism of his handling of the pandemic, and he remained defiant Tuesday that his early action -- including banning flights from China, where the virus first emerged -- helped prevent a catastrophe.

"We did a great job on CoronaVirus," Trump tweeted. "We saved millions of US lives!"

Trump's November election rival, Democrat Joe Biden, has accused the president of gross incompetence during the crisis and chastised him Tuesday for "intentionally slowing" testing of coronavirus.

"It's pretty simple: If we want to save people's jobs and save people's lives, we need more testing -- and we need it faster," Biden posted on Twitter.

While the nation's former virus epicenters New York and New Jersey have largely controlled their outbreaks, the number of cases is now increasing in 20 states.

Florida is a potential new hotspot that surpassed 100,000 cases on Monday, according to local health officials.

Brett Giroir, the administration's testing coordinator, told the House panel that 27 million tests have been administered to date.

About 500,000 are now being conducted daily, and Giroir said he expects the country will be able to test 40-50 million people per month by autumn.

Experts warned that any potential "second wave" of virus cases could be compounded in the autumn and winter, when the typical American flu is more rampant.

In an effort to address that inequality, Giroir announced the launch of a $40 million initiative to fight COVID-19 among ethnic minorities and other vulnerable communities.

"We Kill Kafirs Like You": Taliban Whip Activist For Participating In Protest, Says Report