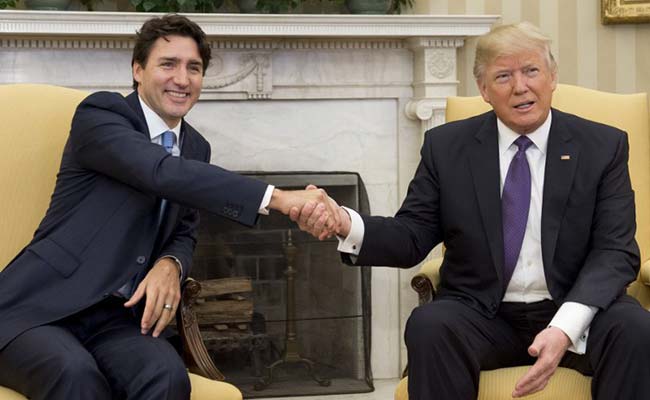 Washington, United States: Donald Trump boasted he made things up in a conversation with Canada's prime minister, insisting the US ran a trade deficit with its neighbor despite having "no idea" if the claim were true, the Washington Post reported.

The US president recalled the exchange with Justin Trudeau in a fundraising speech in Missouri, of which the paper said it had obtained an audio recording.

"Trudeau came to see me. He's a good guy, Justin. He said, 'No, no, we have no trade deficit with you, we have none. Donald, please,'" Trump said, imitating Trudeau, the Post said.

"Nice guy, good-looking guy, comes in 'Donald, we have no trade deficit.' He's very proud because everybody else, you know, we're getting killed.

According to the US Trade Representative, the United States runs a trade surplus with Canada.

Trudeau met with Trump at the White House in October last year, when the conversation purportedly took place.

The Missouri speech also saw the president lash out at US allies and major global economies over trade.

Trump said allies including the European Union, Japan and South Korea, as well as China, had ripped off the United States and American workers.

"Our allies care about themselves," he said. "They don't care about us."

He seemed to suggest that the United States would withdraw troops stationed in South Korea if it did not get its way with Seoul on trade.

Trump criticized other politicians for wanting to keep the North American Free Trade Agreement with Canada and Mexico, which is being renegotiated at Trump's insistence.

"The best deal is to terminate it and make a new deal," he said of NAFTA, according to the Post.

Promoted
Listen to the latest songs, only on JioSaavn.com
"They couldn't have met" with Kim, Trump said, after mocking former presidents Barack Obama and George W. Bush. "Nobody would have done what I did."